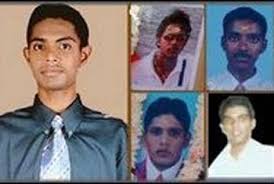 Amnesty International has launched a new campaign to seek justice for the five students killed in Trincomalee in 2006.

Amnesty International has been campaigning over the years to get justice for the “Trinco Five” students in Sri Lanka.

Ragihar Manoharan and four other Tamil students were killed, allegedly by the security forces on January 2, 2006 in Trincomalee.

Despite two police investigations and a Presidential Commission of Inquiry (PCoI), no one has been prosecuted for their murder.

“We now have a new petition demanding justice for the Trinco Five students (bit.ly/2DSNKO0).  The Sri Lankan government must effectively investigate and prosecute those responsible for these murders so that the families of the students may at last receive justice,” Amnesty International said.

President Sirisena ready to Form a new SLFP -led Govt if all 96 MP”s elected from the UPFA in 2015 General Election if they come and stand with him
India will remain with Sri Lanka in rain, in sunshine’- envoy
Comment