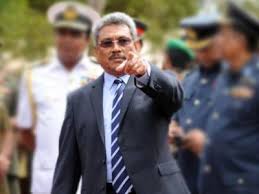 The monk, Ven Vendaruwe Upali thera, made this remark while speaking at a religious ceremony to mark the birthday of the former Defence Secretary.

He is an Anunayake of the Asgiriya Chapter, in Kandy.

“What I have to say is that you must take lead in building this country up. Launch into a military rule like Hitler and revive this country,” he said.

The monk’s remarks came under severe criticism on social media yesterday as many opined that it was an open invitation for a violent rule.

Former German ruler Adolf Hitler was directly responsible for killings of hundreds of thousands of jews during his rule in Nazi Germany.