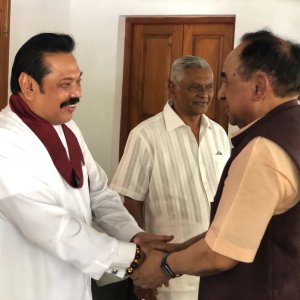 Rajapaksa tweeted saying he was invited by Swamy to speak at an event in New Delhi.

“I welcomed my good friend Dr. Subramanian Swamy to Medamulana today and am honoured to accept his invitation to speak in New Delhi. A long-time friend of Sri Lanka who has always so vehemently spoken out against LTTE terrorism, he has always had #SriLanka’s best interest at heart,” Rajapaksa tweeted.

Meanwhile, Swamy tweeted saying Rajapaksa must be admired for his decisiveness to wipe out LTTE terrorism.

“It was a hugely enjoyable trip to South Sri Lanka to meet Fmr SL President Sri Mahinda Rajapaksa and his family. He is a man to be admired for his decisiveness to wipe out LTTE terror and incidentally also soothe India’s hurt feelings due to Rajiv’a assassination by LTTE,” Swamy said.

“He is apprehensive of gross rigging in their forthcoming election. India cannot allow that as a neighbour and also since current usurper President Yamin has humiliated Indians recently. We need an action plan,” Swamy tweeted.