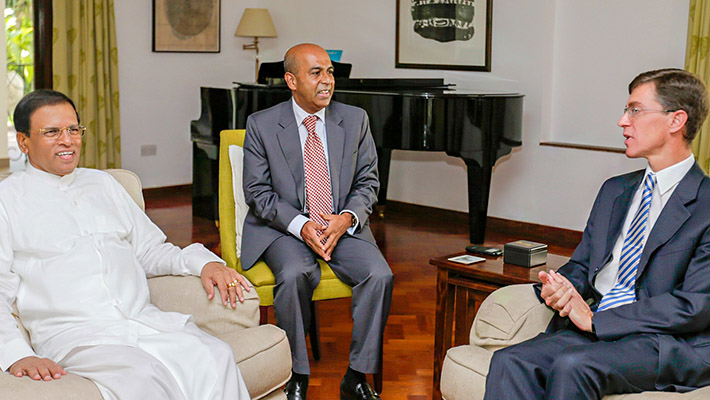 British authorities are silent on a damning news report about a top-level meeting with the Sri Lanka president on punitive action against an exiled journalist living in the UK.

Colombo based Sunday Times had reported that President Maithripala Sirisena made a request from High Commissioner James Dauris to either arrest or deport lankaenews Editor Sandaruwan Senadheera, who had fled Sri Lanka.

Access to the website has been blocked in Sri Lanka since November 2017, following a string of articles bringing the president to disrepute.

President Sirisena had made the request from High Commissioner Dauris in the presence of two high ranking officials.

“Among those present at the discussion were the President’s Coordinating Secretary Shiral Lakthilaka and Defence Secretary Kapila Waidyaratne,” The Sunday Times reported.

The British foreign ministry and its high commission have either evaded or ignored repeated requests by JDS seeking answers.

Following the Sunday Times exposure on 10 June, JDS sought a response from Minister of State for the Foreign and Commonwealth Office (FCO) Mark Field and the British high commission (BHC) in Colombo.

The mail sent on 11 June specifically asked whether British authorities are satisfied that there are reasonable grounds to return Pradeep Sandaruwan Senadheera to Sri Lanka.

Instead of providing their own version of the reported meeting, the BHC’s Communications Manager referred to a public denial by the Sri Lanka president’s media division (PMD).

“The said news item is incorrect and falsely reports the said meeting, and no request was made for either deportation or arrest of the editor of the claimed website or any other person,” said the PMD.

Strongly disputing the presidential denial, The Sunday Times of 11 June published further details reaffirming the factual accuracy of their story by adding further information on the controversial discussion between Sirisena and Dauris.

The English weekly reported how the president’s office had provided documentation, apparently to reinforce their request.

“The President’s staff also handed over to High Commissioner Dauris, a dossier of Sinhala reports, translated into English, published on the Lankae-News website,” it said.

Drawing attention to the fresh information, JDS wrote to the British high commission in Colombo with a copy to the FCO giving an opportunity to tell their side of the story.

However, British authorities are yet to provide an answer.

The website Groundviews had revealed that the Telecommunications Regulatory Commission (TRC) blocked access to lankaenews.com within Sri Lanka following a directive from the president’s office.