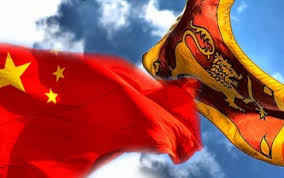 A high-level delegation from China had talks with former President Mahinda Rajapaksa today on some of the projects China is involved with in Sri Lanka.

Meanwhile, the Chinese Communist Party has stated that China will continue to stand with Sri Lanka as a true friend.

The CCP made this remark when the delegation led by Song Tao met with President Maithripala Sirisena at the President’s official residence, today.

The Chinese Communist Party invited a delegation of the Sri Lanka Freedom Party (SLFP) to participate in a Conference which is to be held next June in China.

The President recalled with gratitude the assistance given by the Chinese Government for the development work in Sri Lanka and said that the mega development projects will contribute to build the economy of the country. He also said that the aim of the present Government is to strengthen China-Sri Lanka relations in every sphere.

Wickremesinghe is to visit China in May on an invitation extended by the Chinese President.

Full Text of Speech made in Parliament by Leader of the Opposition Rajavarothayam Sampanthan during Adjournment Motion Debate on Feb 22nd 2017
SLFPers keen on amendments not new constitution: Dilan
Comment