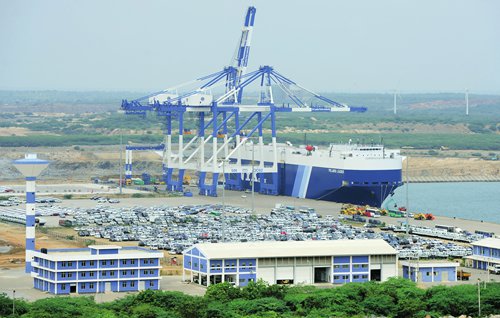 India has launched fierce attacks against Chinese commercial activities in Sri Lanka in recent weeks, and moved to secure more projects in Sri Lanka with Japan, in what appears to be desperate moves to maintain its declining influence in Sri Lanka, the Global Times in China quoted Chinese experts as saying.

Chinese experts pointed out that India, which has considered Sri Lanka its backyard rather than a sovereign nation, has adopted a very dangerous zero-sum mindset on China’s cooperation with other countries, which is not conducive to regional economic cooperation.

On December 9, Sri Lanka formally handed over commercial activities at the Hambantota port to China Merchants Port Holdings Co as part of a $1.2-billion deal that would grant the Chinese company a 99-year lease on the port. The port, which was financed and built by Chinese companies, went into operation in 2010 but has failed to make a profit.

The handover of the port to the Chinese company has drawn widespread attention among global media outlets, especially those in India.

China Merchants Port Holdings Co declined the Global Times’ request for comments over the weekend, but official documents showed that the company considered the deal purely commercial and not political.

At the Colombo International Container Terminals Ltd (CICT), another investment by the company in Sri Lanka, there are only 25 Chinese employees out of a total of more than 1,300 employed at the project.

The document stated that the management of Hambantota port will learn from CICT in the future.

“The lease agreement has entitled China to operate the port and to generate revenue. This is beneficial to both the local economy and job creation, a truly win-win deal,” Zhou Fangyin, a professor with the Guangdong Research Institute for International Strategies, told the Global Times on Sunday.

Zhou pointed out that the investments China has committed to are large in scale, high in risk and take years to complete, yet they are expected to generate revenue, and the agreements aid development without causing too much debt for the host country.

Zhou Yongsheng, a professor at the China Foreign Affairs University’s Institute of International Relations, pointed out that China-Sri Lanka cooperation has been conducted under the principle of equality, mutual benefit and win-win cooperation.

The two experts said that India’s reaction to China’s cooperation with Sri Lanka reflected the zero-sum mindset of some Indian officials and media outlets and their lack of knowledge of international law.

“India has always had strong influence over the decision-making of many South Asian countries on foreign policy, including Nepal, Bangladesh and Sri Lanka, treating them like its backyard,” Zhou Fangyin said. “However, such an overbearing mindset will not work anymore.”

Zhou Yongsheng said any negative comments from India are sour grapes. “India’s negative comments reflect its lack of common sense in international law, as they narrow-mindedly assume the Indian Ocean belongs to India.” he said.

Zhou Yongsheng further pointed out that India is using double standards toward China in sharp contrast to its view of the US and Japan.

“The lease agreement is a reasonable commercial arrangement, but even if China some day would leverage the port for any military activities, it is totally understandable,” he said. He added the US has established many military bases over the world, and the Japan Self-Defense Force Base Djibouti is a military base operated by the Japan Self-Defense Forces located near Ambouli, Djibouti.

“If that is not tagged as a neo-colonial model, there is no point to label China’s commercial lease agreement as such,” Zhou Yongsheng stressed.