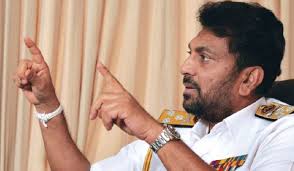 On Thursday when the magisterial inquiry into the abduction of eleven youth by a Navy abduction gang for ransom concluded for the day, parents of the missing boys waited near courts hoping to attract the attention of investigators led by OIC of the Gang Robberies Unit of the CID, IP Nishantha Silva. A decade after their children disappeared, and in spite of mounting evidence that they were murdered, this small group of women want to keep begging Silva and his team of investigators to do more to find their boys.

Earlier during the proceedings OIC Silva submitted an explosive revelation in his latest B report to Court on the gruesome navy abduction for ransom racket the CID has painstakingly uncovered, in an investigation that has spanned nearly a decade. With suspects going right up the chain of the Sri Lanka Navy command,implicatingthe current Chief of Defence Staff and the war-time Commander of the Navy, the case has generated wide public interest.

OIC Silva’s B report last week, revealed the CID’s latest breakthroughs in the high profile case of abduction and murder by Navy sailors.

The CID now has in its custody, a key suspect who not only helped the suspected ringleader of the abduction racket Lt. Commander Chandana Prasad Hettiarachchi alias Navy Sampth to abduct the young men from the suburbs of Colombo, and hold them illegally at the Pittu Bambuwa naval prison in Colombo, and then transport the boys to their last known location at the Gun Site within the Trincomalee Eastern Command.

The suspect has provided vital evidence to investigators, who have now firmly pieced together the two locations where the CID had always suspected that the youth had been held in illegal detention. The CID presented the statement made by Navy Sailor Dushantha Kottegoda to Court last Thursday.

The CID on the day also informed Magistrate Ranga Dissanayake that it has now been confirmed without doubt that former Commander of the Navy Admiral Wasantha Karannagoda knew where, when and how the youths were abducted and that he also knew of their eventual fate. As he concluded Silva said that after obtaining further statements from Karannagoda the progress of the investigations will be informed to Court in due course. Signalling the possible end of investigations, Silva also told Court they are now on the hunt for one final suspect. “He is only known to us by his alias but we are closing in on him” he told the Magistrate.

While a number of the Navy’s sailors and officers have stepped up to provide vital evidence, according to the CID, several members of the abduction gang have now admitted to and confirmed the forced abductions of the 11 youth which occurred between 2008 – 2009. The evidence also corroborates information provided by the abductees themselves to parents and relatives through phone calls during their illegal incarceration as well as by naval guards who were in charge of the youth, investigators said.

Naval Sailor Dushantha Kottegoda who claimed he transported the abducted men from the naval prison in Colombo to the Gun Site in Trinco, has revealed that since reporting to SLNS Parakrama in 2008 he was enlisted for special duties with the main suspect in the case, Lt. Commander Chandana Prasad Hettiarachchi better known by his alias Navy Sampath. Giving damning evidence, Kottegoda has since revealed information and owned up to the abductions of 10 of the 11 missing youth.

According to Kottegoda, he and Lt Commander Hettiarachchi and two others abducted John Reid, one of the 11 victims in Uswetakeiyawa, Wattala along with his van on August 9, 2008. Reid’s girlfriend who was with him at the time was left unharmed by the gang. Kottegoda in his statement claims the group drove Reid to the now infamous Pittu Bambuwa located within SLNS Parakrama.

Going on to prove that an abduction ring in fact existed, Kottegoda has also revealed that on his return from a holiday he found yet more people had been abducted by the group led by Navy Sampath. “I saw Amalan Lyon and Roshan Lyon at the Pittu Bambuwa. They were being questioned” he had told investigators. According to the CID, the father and son had been kidnapped by the gang on August 25, 2008 from the Ramanathan flats in Kotahena.

But what Kottegoda had to say next was perhaps no surprise to SarojiniNaganathan. During the few phone calls her son made to her between December 2008 – May 2009 from the Pittu Bambuwa having borrowed the phone from yet another of his abductors known by the alias Annachchi, Rajiv Naganathan had described the place he was being held at claiming he could see the Police Headquarters from the windows of rooms close to their cell.

Visiting the site recently, the CID has been able to confirm that illegal detention cells were located at the site. “We discovered holes which we believe were held in place with iron bars such as that in a Police holding cell,” OIC of the Gang Robberies Unit IP Nishantha Silva told court. The CID says the youth were kept in 15 x 15 feet cells with views of the Police HQ as described by Naganathan to his mother.

“According to orders given by Lt. Commander Sampath Munasinghe, Hettiarachchi, several others and myself abducted the five youth from Dehiwala” Kottegoda confirmed to the CID sleuths. During his statement to the CID Kottegoda has also confirmed that it was the same group which had abducted the father of John Reid, Kasthuri Arachchige Anton. While confirming their activities were known by main suspects Lt. Commander Sampath Munasinghe and former Navy Spokesman Commodore D.K.P Dassanayake, Kottegoda has revealed that the abducted men were taken to Trincomalee on different occasions and handed over to yet another suspect in the case, Lt. Commander Sumith Ranasinghe.

The CID has also been able to confirm this evidence through further statements by more members of the group. According to Navy sailor S.S.K Somadasa, he was also enlisted with Hettiarachchi for special duties since 2008 at SLNS Parakrama and had seen John Reid at Pittu Bambuwa though he had not taken part in his abduction. Somadasa also confirmed he saw the five youth abducted from Dehiwala including Rajiv Naganathan at the same location. “They abducted them and brought them to the location, I was there,” he told the CID.

He too confirmed the presence of the Lyons, Anton and Ali Anver at the while also claiming that in March 2009, Rajiv Naganathan and others were taken to the underground cells at the Gun Site located within the Trincomalee Eastern Naval Command. Despite making no appearance in Court this week after successfully obtaining an order against his possible arrest, the recent statements by several key witnesses have however only further implicated former Navy Commander Admiral Wasantha Karannagoda. In their statements to investigators, they revealed his failure to take prompt action against the wrongdoers despite having the necessary information at hand.

Providing a statement to the CID, Karanangoda’s former Naval Assistant Rear Admiral (Rtd.) Udaya Keerthi Wijebandara has revealed that he personally informed Karannagoda of the abduction racket being carried out by a group of Naval officers including Karanangoda’s personal security officer at the time and suspect Lt. Commander Sampath Munasinghe. According to Wijebandara, it was Commodore Jagath Jayantha Ranasinghe, presently the Chancellor of the Kotelawala Defence University, who initially informed him of the racket after Ranasinghe was approached by Raman Prabhakaran, an uncle of Rajiv Naganathan.

“I then informed Intelligence Director A.K Guruge about the abduction,” he told the CID adding that thereafter he received information that the youth were being held at a Naval site close to the sea. According to Wijebandara, this information was conveyed to Karannagoda. “He (Karannagoda) called Sampath in and enquired, he then said it is Ranasinghe who is saying these, resolve this matter with him” Wijebandara recalled in his statement.

According to Wijebandara on a later date, Commodore Ranasinghe once again inquired about the five youth from Karannagoda over the phone. This prompted Karannagoda to make inquiries from the Head of the Eastern Command Admiral S.M.B Weerasekara who responded that no such individuals were being held at Gunsite. However, suspicious of Munasinghe’s behaviour, Wijebandara had tasked a Lieutenant to find more information about his activities. “I found information on illegal activities being conducted by Munasinghe and informed about them to Karannagoda” Wijebandara said. However, at the time, Karannagoda had not paid attention, he claimed saying that however, it was only later that Karannagoda complained to the Police only after finding incriminating evidence in the room of Munasinghe.

But perhaps it was the evidence provided to the CID by former Naval Intelligence Director Rear Admiral A.K Guruge that was the most news for the parents of the youth. Sending Lt. Commander Krishan Welagedara to gather information on the abducted youth, Guruge told the CID that it was revealed the boys and their car was once at the Eastern Command but at the time of the inquiry, the missing persons nor the vehicle were on the premises. According to Guruge, the youth had been killed while in the custody of Ranasinghe.

For desperate families, trudging to the Fort Magistrate’s Court week after week, these reports of evidence about the fate of the boys read out by the investigators in court, mean nothing. All they really want the CID to do is to find their children. Sarojini Naganathan whose only child Rajiv went missing on September 19, 2009, rounded on IP Silva soon after the hearing last Thursday. “Has anyone said yet where the children are?” she demanded. “I have looked everywhere, Amma,” the burly official replied, trying to be as gentle as possible. “If they are still around, I would have found them.”

As Sarojini Naganathan broke down in tears, mothers of other abducted boys surrounded her. “I know the boys are being held somewhere,” the mother of Rajiv’s friend Dilan Jamaldeen told Silva defiantly, “please keep looking for them.”