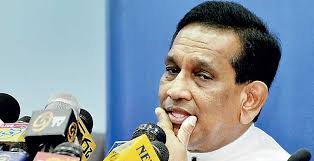 Rajitha Senaratne, accompanied by his lawyer, Gunaratne Wanninayake, appeared before the Criminal Investigations Department (CID) at around 10.00 am and was interrogated until 1.30 pm.

Colombo Chief Magistrate Lanka Jayaratne has ordered the Criminal Investigation Department (CID) to record a statement on the incident after Rajitha Senaratne was released from the hospital.

The Parliamentarian was arrested and remanded last month over the controversial ’white van’ media conference on November 10 ahead of the presidential elections. The Colombo Magistrate’s Court granted bail to Senaratne on Dec 30.