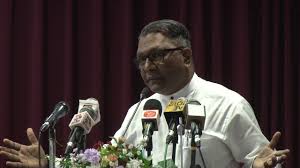 It is deeply regrettable and unfortunate that some portions of my remarks at Monday’s news briefing, especially in the English media, had lost its original meaning and intention either due to the translation or for reasons unknown, Northern Province Governor Dr. Suren Raghavan told the media.

“It had been brought to my attention that there has been some media reporting on the press interview I gave about my participation at the Geneva UNHRC session and a subsequent reaction from the OHCHR to the same. True we discussed our differences and the fundamental reasons for them; further how to overcome them collectively.

However, all our exchanges were with full of bilateral respect. UNHRC High Commissioner Michelle Bachelet and the entire staff were extremely helpful, professional and cordial and our meetings were at the highest level of cooperation and goodwill. We all worked together and negotiated for the path of post war recovery of peace and democracy in Sri Lanka,” Dr. Raghavan said.

“I regret if there has been any misquoting and misrepresentation. Madam Bachelet is an exemplary high commissioner who displayed the highest order of diplomacy and skills which I valued so much” he added.