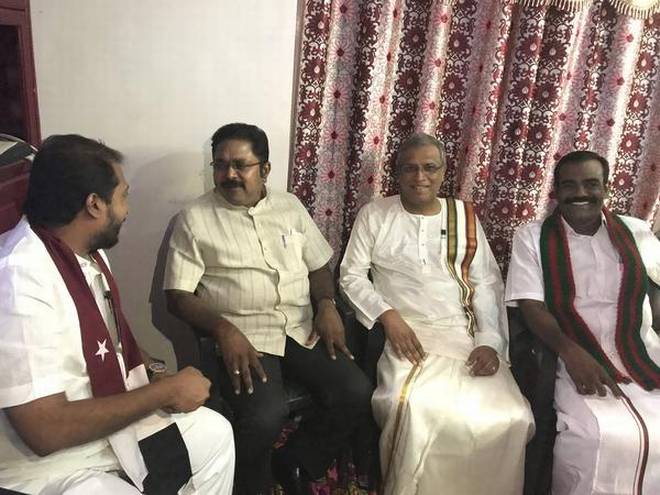 On the eve of his R.K. Nagar byelection victory, T.T.V. Dhinakaran had a chance meeting with Sri Lankan Tamil leader M A Sumanthiran, when he enquired about the current situation of Sri Lankan Tamils in the island’s war-battered north and east, The Hindu newspaper reported.

The Tamil politicians from either side of the Palk Bay met in Kanyakumari on Friday, ahead of the ‘Arumanai Christmas Vizha’, an annual celebration held in the southern district that has a near-50 per cent Christian population.

The organising committee had invited Tamil National Alliance (TNA) leader R. Sampanthan, Leader of Opposition in Sri Lanka, but the senior politician could not travel following a respiratory illness.

Sumanthiran, a Jaffna district parliamentarian and a spokesperson of the TNA, attended the event, in which Dhinakaran also participated.

“We met for about 20 minutes before the public meeting began. Mr. Dhinakaran asked about how the Tamils of the north and east were doing in the post-war period,” Mr. Sumanthiran told The Hindu on Monday. The TNA MP appraised the dissident AIADMK leader of the status of the reconciliation process.

Some of Mr. Dhinakaran’s allies asked Mr. Sumanthiran if the current national unity government led by President Maithripala Sirisena and Prime Minister Ranil Wickremesinghe was better than the Mahinda Rajapaksa administration earlier. “I told them this government is better, but that our pursuit of a long-lasting political solution to the Tamil question continues,” the TNA MP said.

Later, at the public meeting, some speakers including MLAs from different parties urged Sri Lanka to release the Indian fishermen arrested recently by the Sri Lankan Navy on charges of trespassing into the island’s territorial waters and practising illegal fishing. “They (the MLAs) expressed solidarity with Sri Lankan Tamils for a political solution in a merged north-east,” Mr. Sumanthiran said. Amid, resistance including from sections of Sri Lanka’s Tamil-speaking Muslims, the TNA has been demanding a merger of the Northern and Eastern provinces in the new constitution that Sri Lanka is currently drafting.

Through the years of Sri Lanka’s three-decade war and after, leaders of various Tamil militant groups as well as those from political parties have maintained links with Tamil Nadu politicians across parties.