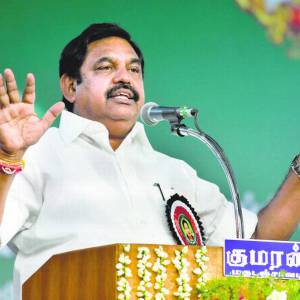 The DMK and the Congress were fully responsible for the genocide of a large number of Tamils during the final phase of the Eelam war in Sri Lanka, and should be booked for war crimes, Chief Minister Edappadi K. Palaniswami said here on Tuesday.

Speaking at a protest meeting organised by the AIADMK to highlight what the party alleged was the role played by the DMK and the Congress in the massacre of innocent Tamils in Sri Lanka, Mr. Palaniswami said the tragedy occurred only after Karunanidhi, who was then the Chief Minister, ended his fast within three hours, claiming that a ceasefire had been declared in the island nation.

Emphasising the need for reviving this issue, Mr. Palaniswami said many were not aware that the then DMK-Congress coalition government at the Centre had played a major role in the killing of innocent Tamils.

The decisive role played by the rulers at the Centre back then came to light only after former Sri Lankan President Mahinda Rajapaksa made public the “secrets” regarding the “assistance” provided by the Indian government to his country in the final stages of the conflict, during his recent visit to New Delhi, the CM said.

He said the AIADMK was planning protest meetings across the State with the twin objectives of drawing the attention of the Centre and of the international community to the “betrayal” of the Tamil community by the DMK and the Congress.

Before the commencement of the protest meeting, AIADMK MPs and MLAs, along with the rest of the gathering, raised slogans against the DMK and the Congress.

USA to give Sri Lanka US$ 480 million grant
31st remembrance of day of Lt.Col.Thileepan has been commemorated at the University of Jaffna -Reporter for Global Tamil News-
Comment