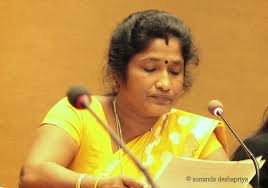 Northern Provincial Councillor Ananthi Sasitharan stated that Embassies of the countries which protect Sri Lankan government would be besieged by the demonstrators in the upcoming weeks.

She stated like this while delivering speech at the protest staged in Jaffna yesterday in solidarity with the protests demanding the immediate release of the people’s lands occupied by the occupying Sri Lankan Armed Forces and the protest staged by the relatives of those who were disappeared.

She further stated that though various protests had been staged during the Mahinda’s regime even in the midst of intimidations, the number of protests had decreased in the regime if so called government of good governance. However, people then started protesting with the demands of immediate release of their appropriated lands, release of both political prisoners and those who were disappeared, she added.