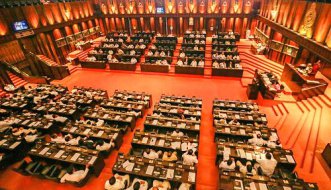 The European Union, the UK and Canada today continued to push for Sri Lanka’s Parliament to meet immediately to resolve the political crisis in the country.

The European Union (EU) said that the sudden deterioration of the situation in Sri Lanka over the weekend puts the country at risk of instability and unrest.

Along with other key international partners of Sri Lanka, the Ambassador of the European Union met yesterday (Monday) with President Maithripala Sirisena, to express their expectation that a solution respectful of the country’s constitution would be found quickly.

“To this end, it is important that the President allows the immediate reconvening of the Parliament so that the elected representatives of the Sri Lankan people can fulfil their duties. In the current context of tensions and uncertainties, it is of utmost importance that violence and provocation are avoided and that law enforcement agencies act with restraint,” the EU said.

The EU expects Sri Lanka to pursue its positive path towards reconciliation and democracy for the full benefit of the Sri Lankan people.

Meanwhile the British Foreign and Commonwealth office said that it was concerned by ongoing political developments in Sri Lanka and was following the fast-moving situation closely.

“Once again, I call upon all parties to uphold the constitution and due political and legal process. I urge President Sirisena, in consultation with the Speaker, to reconvene the parliament immediately in order to give the democratically elected representatives of the Sri Lankan people their voice at this time,” Minister for Asia and the Pacific Mark Field said.

He said the UK, as a friend of Sri Lanka, remains committed to working with international partners and alongside the Sri Lankan Government and people to support democracy, human rights, and reconciliation.

“We reiterate our call for all parties to refrain from violence and respect due process and the rule of law. Canada calls on President Maithripala Sirisena to immediately reconvene Parliament and rescind the decision to prorogue. The people of Sri Lanka deserve transparency and accountability. The Parliament of Sri Lanka—whose representatives have been duly elected by the people of Sri Lanka—must be afforded their constitutional responsibility to determine Sri Lanka’s prime minister,” the Canadian Foreign Ministry said.

Canada called upon the Government to ensure the safety and security of journalists, activists and human rights defenders, who play a vital role in defending democracy.