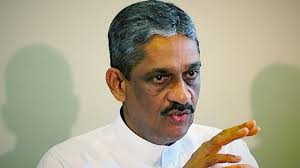 The minister used the time allocated to him in the Parliamentary debate to speak on the recent arrests of his political supporters, trying hard to convince that those arrests were made based on fabricated and false evidence.

The irked minister heaped a series of accusations on Latheef as well as several other STF officers even naming them. He allegedly linked Latheef’s brother-in-law to the Cocaine consignment discovered at the Orugodawatte Container yard in 2016.

The Field Marshal also requested a special investigation into the incident where an underworld figure known as D. Manju was killed during a shootout with the STF in Wattala in February.

He referred to DIG Latheef as a “bull in the China shop”. The minister said the Police Commission had given “too much freedom” to Police and that freedom was being misused by some police officers. He also said corruption was still rampant in the public sector.

At the end of Fonseka’s speech MP Wimal Weerawansa observed that the information revealed by Fonseka, if true was of a serious nature, and if those are untrue those officials named by Fonseka would be heavily inconvenienced.

The minister in reply said that he had already presented those details to Prime Minister Ranil Wickremesinghe and that the PM requested a report from him over those matters. “I am now preparing that report and the PM agreed to refer it to the CID for an investigation,” he said.

Law and Order Deputy Minister Nalin Bandara agreeing that Fonseka’s statement was controversial said that Law and Order Minister Ranjith Madduma Bandara and he had already paid attention to it. He said those matters would be referred to the State Intelligence Unit (SIU) for an independent investigation.

He however said the STF had been rendering a commendable service, but added that there could be few who behaved in an unacceptable manner. He observed that he was not in a position to comment as to who was right and who was wrong as he was yet to receive official information.