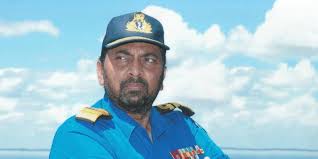 The ongoing high profile case involving a group of navy officers in the alleged abduction and disappearance of eleven persons in 2008 has taken a dramatic turn with wartime Navy Chief the then Vice Admiral Wasantha Karannagoda initiating legal proceedings against Navy Commander Vice Admiral Travis Sinniah in respect of a recent statement made by the latter to the Criminal Investigation Department (CID).

Rear Admiral Sinniah succeeded VA Ravi Wijegunaratne several days ago. On being appointed as the Commander of the Navy, Sinniah, who played a significant role in Sri Lanka’s successful war against terrorism, received appointment as Vice Admiral.

The CID has recorded the then Eastern Commander Rear Admiral Sinniah’s statement last month regarding the alleged abductions and disappearances blamed on the navy.

Attorney-at-law Wasantha Wijewardane, Counsel for Admiral Karannagoda as well as Rear Admiral Bandara informed Sinniah by letter dated Aug 13 their decision to proceed with defamation cases over accusation that Karannagoda and his staff had been aware of the detention and subsequent killing of those who were detained at the gun-sites numbered 1 and 2 at the Trincomalee navy base.

At the time of the alleged use of gun-sites numbered 1 and 2 at the Trincomalee navy base, Sinniah had been the Deputy Area Commander. Sinnah led naval task forces responsible for successful destruction of several floating LTTE warehouses on the high seas.

Following the change of government in January 2015, Sri Lanka allowed United Nations Working Group on Enforced or Involuntary Disappearances to inspect ‘gun -sites numbered 1 and 2 at the Trincomalee Navy camp.

The police launched an investigation into alleged abductions and disappearances in June 2009 following a complaint lodged by Vice Admiral Karannagoda in late May 2009 regarding the recovery of four national identity cards, one passport bearing the name of one of those whose national identity cards were found, one mobile phone, promissory notes worth over one million rupees and approximately 450 rounds of ammunition from Lt. Commander Sampath Munasinghe’s cabin, the then senior officer in charge of Admiral Karannagoda’s security.

Munasinghe surrendered to the CID in June 2009.

The CID recorded statement from retired Rear Admiral S.M.B. Weerasekera, who had been the Trincomalee Area Commander at the time Sinniah held the post of Deputy Commander there in connection with the inquiry. In addition to them, over 50 officers and men, including Admiral Karannagoda had been questioned and their statements recorded in this regard.

Among those so far arrested and remanded in this connection were Commodore D.K.P. Dassanayake whose arrest was made ahead of UN Special Rapporteur Ben Emmerson’s, visit in July. Emmerson, in his preliminary report released referred to Dassanayake’s arrest in connection with the alleged disappearance of 11 persons. In addition to Dassanayake, Commander R.P.S. Ranasinghe and three other navy personnel had been remanded whereas Lt. Commander Munasinghe is out on bail. Lt Commander H. M. P. C. K Hettiarachchi is absconding.

Sources familiar with the case told The Island that Dassanayake hadn’t been wartime Director Naval Operations (DNO) nor in charge of special teams led by Lt Commander Ranasinghe, who was the senior intelligence officer in the East and Lt. Commander Hettiarachchi allegedly responsible for abductions and disappearances.

Of the missing eleven persons, five were allegedly taken into custody on Sept. 17, 2008 by navy personnel along with black coloured Tata Indica. Police have identified them as Rajiv Naganathan (21 years/Colombo 13), Pradeep Vishvanathan (18 years/Wasala Rd, Colombo 13), Mohammed Sajith (21 years/Dematagoda), Thilakeswaram Ramalingam (17 years/Bloemendhal housing complex, Colombo 13) and Jamaldeen Dilan (Maradana). Those involved in the operation were believed to have been accompanied by a navy informant Mohammed Ali Anwar alias Hadjjiar of Karagampitiya, Dehiwela. Subsequently, the 28-year-old informant, too, had disappeared; he has been listed among those eleven missing.