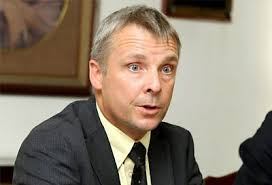 The German Ambassador to Sri Lanka Joern Rohde said that he fully agrees with President Maithripala Sirisena and Prime Minister Ranil Wickremesinghe’s condemnation of the “outrageous remarks” made by the Venerable Venduruwe Upali Thera about the need for a Hitler in Sri Lanka.

“The remarks only demonstrate that wearing a robe does not prevent individuals from issuing irresponsible and plain stupid statements. We need more democracy- not less- all over the world,” the German Ambassador said.

Under Hitler’s leadership and racially motivated ideology, the tnen German Nazi regime was responsible for the genocide of at least 5.5 million Jews and millions of other victims whom he and his followers deemed Untermenschen (sub-humans) or socially undesirable.

Hitler and the Nazi regime were also responsible for the killing of an estimated 19.3 million civilians and prisoners of war.

In addition, 29 million soldiers and civilians died as a result of military action in the European theatre. The number of civilians killed during the Second World War was unprecedented in warfare and the casualties constituted the deadliest conflict in human history.