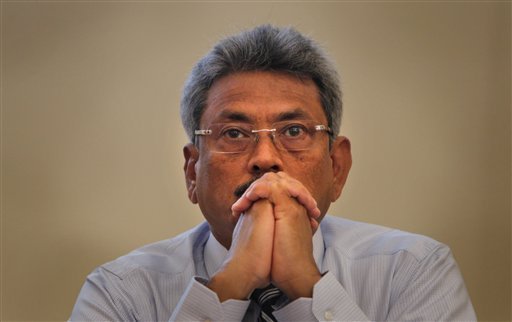 Former Defence Secretary and presidential aspirant Gotabaya Rajapaksa landed in Colombo on Friday to a jubilant welcome from supporters eager to buttress his spirits as his criminal proceedings in Sri Lanka have been compounded with a lawsuit filed in the United States alleging his complicity in the extra-judicial killing of his old nemesis Lasantha Wickrematunge, the founding Editor of The Sunday Leader.

Last Sunday evening (7), a licensed process server intercepted Rajapaksa at a grocery store in the Pasadena suburb of Los Angeles, California, and physically served him with a summons to answer to a lawsuit filed in the United States District Court for the Central District of California by Ahimsa Wickrematunge, the daughter of Lasantha Wickrematunge.

The summons, which has been circulated amongst confidants of Rajapaksa, reads “a lawsuit has been filed against you”, and states that “within 21 days after service of this summons on you (not counting the day you received it)” he “must serve on the plaintiff an answer to the attached complaint or a motion” to the District Court contesting the case. “If you fail to respond, judgment by default will be entered against you for the relief demanded in the complaint,” the summons read.

Attached to the summons was a lengthy complaint by plaintiff Ahimsa Wickrematunge alleging that “Nandasena Gotabaya Rajapaksa, a United States citizen and Sri Lanka’s then Secretary of Defence, instigated and authorised the extra-judicial killing of Lasantha” and “had responsibility over those who executed the assassination” according to an excerpt widely distributed on social media.

Hours after the service of the summons and complaint, the former Defence Secretary’s propaganda machine went into hyperdrive, issuing statements denying not only that he was served papers by lawyers for Wickrematunge and another plaintiff, but that he was even in California at all. Photographs were released showing Rajapaksa in Nevada to indicate that the story was fake.

On Monday (8), the former defence secretary’s nephew MP Namal Rajapaksa issued a statement on Twitter that “as far as we are aware Gotabaya Rajapaksa never received summons of any form,” adding that he was appalled and amused by the “unsubstantiated claims”.

The following day, a photograph was released on social media of Gotabaya Rajapaksa accepting two brown envelopes from a process server in the carpark of the Trader Joe’s supermarket in Pasadena. The former defence secretary’s spokesman and electronic media institutions aligned with his ambitions first insisted the photograph was a fake, before pivoting to a narrative that alleged that has not “properly” been served by a court in accordance with US Law.

Namal Rajapaksa has since doubled down on his defence of his uncle. “He has not informed us that he was served notice of summons,” the former defence secretary’s nephew told Sunday Observer on Friday. He added that Gotabaya Rajapaksa has “not been named as a suspect” as yet in investigations conducted by the CID into the murder of Lasantha Wickrematunge.

The former defence secretary’s advisors fear that under US law, Rajapaksa could be forced to submit to a deposition in the case brought by Ahimsa Wickrematunge, in which he would be forced to answer questions posed by her lawyers under penalty of perjury. Such evidence could be made admissible in criminal investigations in Sri Lanka, and false statements could open the defendant up to criminal liability in the United States.

A team of attorneys loyal to Rajapaksa who had left the island for the court vacation, are set to return for emergency consultations this weekend, while separate efforts are underway to prevent Sri Lankan police officers from testifying in American courts against Rajapaksa through either executive or judicial maneuvers. Other attorneys have left for the United States for consultations with lawyers in that country.

The United States Federal Rules of Civil Procedure stipulate that a summons “must be served with a copy of the complaint” and that “any person who is at least 18 years old and not a party may serve a summons and complaint.”

Speaking toreporters outside the Bandaranaike International Airport, the former Defence Secretary doubled down on the new message from his spokesmen and refused to accept that he was served summons “properly”. He said that his lawyers in the United States would take steps to seek dismissal of the cases by US courts.

Rajapaksa also debuted a fresh narrative on the question of his long-anticipated relinquishment of US citizenship, an essential step for him to present himself as a candidate at the upcoming presidential elections. He stated that he travelled to the United States to meet with his attorneys to “take steps” towards having his US citizenship removed. Rajapaksa confessed that he has not yet filed an application to renounce his citizenship and stated he would do so when he got the green light from his attorneys.

A source familiar with Rajapaksa’s deliberations told Sunday Observer that the former defence secretary is mulling the optimum path forward with respect to his US citizenship. While supporters including the leaders of Viyathmaga and the EliyaOrganisation continue to push him in a politically expedient direction, Rajapaksa is grappling with the practicalities of legal issues before him.

In the event an application to renounce US citizenship is accepted and the process completed prior to the closing of nominations in a presidential election, he could contest the presidency unimpeded, with a significant chance of victory at the polls.

If, however, US authorities delay the processing of his application long enough to forestall him from contesting the presidency, Rajapaksa would face the prospect of losing his US citizenship under a new president and government, while he remains on trial and under criminal investigation in Sri Lanka for charges including corruption and misappropriation of public property.

While his arrest has been temporarily prevented by the Supreme Court in the MiG Deal investigation an Avant Garde money laundering investigation, his trial for corruption in the Avant Garde saga for now suspended by the Court of Appeal, he is set to go on trial before a three judge bench next month on charges of criminal misappropriation of public funds.

In the event that he fails to secure an acquittal in any one or more of these criminal proceedings and ends up facing a criminal conviction, an American passport would be an asset that the former defence secretary would be remiss to do without.

Last week, addressing journalist at the Presidential Media Awards, President Maithripala Sirisena reminded reporters that he has been one of the most tolerant heads of state in the country’s history. “It’s easy to attack me since I do not maintain links with the underworld or with criminals. I don’t use the tri-forces or the police department for wrong purposes,” he said. The President warned ominously that the media may not be so lucky with his successor.

The CID has told the Mount Lavinia Magistrates Court that detectives believe that a secret military intelligence unit that operated under him in the Ministry of Defence was responsible for several premeditated attacks on journalists, including the abduction of Keith Noyahr, murder of Lasantha Wickrematunge and the assault on Upali Tennakoon.