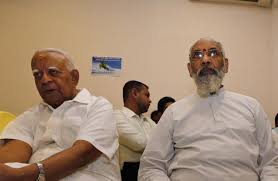 The Ilankai Tamil Arasu Katchi (ITAK), which is the principal constituent of the ruling Tamil National Alliance (TNA) in Sri Lanka’s Tamil-majority Northern Province, is demanding a probe into complaints about the working of departments directly under Chief Minister C.V.Wigneswaran.

The Chief Minister had a probe conducted by a three-man commission into four members of the Board of Ministers.

But the ITAK says the Chief Minister’s way of probing was illegal and constitutional, because probes against any member of the Board of Ministers can be conducted only by a Select Committee of the House (NPC) and not by a body of outsiders. The Inquiry Commission set up the Chief Minister had two retired High Court judges and one retired senior civil servant.

As per parliamentary procedure, extended to the Provincial Councils, it is the privilege of the House to control the conduct of its members, and ministers are members of the House. Any interference by outsiders would be “breach of privilege,” Sumanthiran explained.

Therefore, the ITAK says, there ought to be a fresh probe into charges against the four ministers by a Select Committee of the NPC. And to be fair and even handed, the terms of reference should include charges against the working of departments handled by the Chief Minister himself.

The ITAK will place this demand before the NPC when it meets again on July 6 and this has the backing of the party Supremo, R.Sampanthan, Sumanthiran said.

“Chief Minister Wigneswaran had told Sampanthan that he would hold a fresh legal inquiry against two ministers B.Deniswaran and P.Sathiyalingam. It is the ITAK’s contention that the only legal way to conduct an inquiry is to have it done by a Select Committee of the NPC,” Sumanthiran added.

In an interview to a local Tamil daily on Sunday, Wigneswaran said that as Chief Minister, he has the right to appoint, inquire into and sack ministers. That’s the Chief Minister’s privilege, he contended. Therefore, the three-man inquiry commission he had set up was perfectly legal.

And in the Council, the ITAK and its allies have a majority, having 28 out of 38 members.

Going by his remarks in the Tamil media, Wigneswaran is wanting to let bygones be bygones, but the ITAK is not in a mood to give up its legal rights.

The ITAK is not against a probe but only wants it to be fair, comprehensive, legal and constitutional, member clarified.

“This is the first NPC in the history of Sri Lanka and it is our responsibility to set up good precedents,” he said.

The ITAK also points out that the Chief Minister was partisan in handling the corruption cases, in as much as he had ordered a fresh probe against two ministers when these two had been found “not guilty” by a commission he had himself set up.

In the meanwhile, Chief Minister Wigneswaran refuted the ITAK’s claim that he was its candidate in the 2013 Provincial Council elections and that he should bow to its will. He said he was a consensus candidate of the Tamil National Alliance, an amalgam of parties including the ITAK and therefore no single party can claim exclusive rights over him.