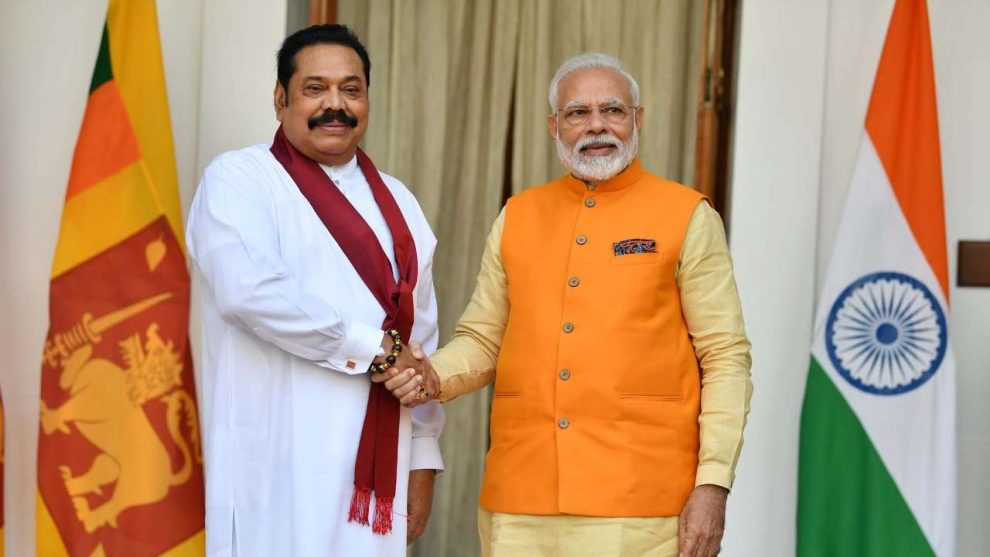 Prime Minister Mahinda Rajapaksa in an interview with Indian Hindustan Times, has said that India is Sri Lanka’s relation while other nations are friends.

Prime Minister Mahinda Rajapaksa is on his first visit to India since taking office. He spoke to Padma Rao Sundarji about Sri Lanka’s ship with Pakistan, which India accuses of being involved in cross-border terrorism; proposed changes to Tamil provincial councils instead of giving them greater autonomy under the constitution’s 13th amendment; and the island nation’s strategic ties with China, which is its largest investor.

One of the subjects you discussed with Prime Minister Narendra Modi today was counterterrorism. Suicide attacks by Islamist bombers killed more than 200 people and injured hundreds in Colombo last year. But you’ve been discussing the same issue with Pakistan, which, for India, is the fountainhead of state-sponsored terror. Isn’t that a contradiction?

We are against terrorism, wherever it comes from. So we discuss the subject with both India and Pakistan, and will continue to do so. And by the way, both Pakistan and India helped us to end the 30-year-long civil war against another kind of terrorism: that of the Liberation Tigers of Tamil Eelam (LTTE). Pakistan gave us weapons and planes. India too helped, but didn’t want to publicise it at the time. Why, without India’s help, I don’t think we would have won that war.

From western investigators to Indian intelligence, many have warned that Pakistan has for years used its diplomatic presence in Colombo to radicalise Sri Lankan Muslims and to encircle India with hostile Islamist groups in neighbouring countries. Given this backdrop, can India take discussions with Sri Lanka on counterterrorism seriously?

We don’t know about those charges, since we didn’t receive that information. But now, of course, we can see what’s going on and have to take action. Look, India and Pakistan — you have your own problems. But that is your internal matter. Whether Islamist terrorism or another kind, we must have some form of cooperation with India. We must exchange views and information. Prior to the Easter suicide bomb attacks in Colombo last April, India shared warnings and intelligence, even on the morning of the attacks itself. But our previous government didn’t take them seriously. That is why those heinous attacks happened. We have appointed a commission now to look into that tragic lapse. The inspector general of police and the defence secretary of the time were taken into custody and released earlier this week.

The Pakistan Navy chief was in Colombo this month, the Pakistan Air Force chief is currently on a visit — there is a constant stream of military visitors from Pakistan to Sri Lanka. Earlier this week, Sri Lankan media quoted its high commissioner as urging Sri Lanka to condemn India for lifting Article 370 in Jammu & Kashmir. Isn’t this an interference in your bilateral relationship with India?

Look, whatever the view of any country, we will not get involved in the internal matters of India. But remember this: I always say India is a relation. Others are friends.

India wants Sri Lanka to implement the 13th amendment to your constitution, which led to the creation of Provincial Councils in the Tamil-dominated areas and urges maximum autonomy for them. But President Gotabaya Rajapaksa suggested recently that the councils may be redundant. Will they be abolished?

No, on the contrary, we are going to strengthen the system of provincial councils. But then, those councils must use what we give them for the development of the North and East regions. Up to now, that didn’t happen. We gave them money for development; instead of trying to help the people of those areas, they returned the money and we did all the development. Even the Tamil National Alliance (TNA), which is well-represented in our parliament was never interested in development. All they were talking about was devolution and creating a separate state for Tamils.

A Free Trade Agreement with India is stuck because Sri Lankans fear an onslaught of Indian goods on the small Sri Lankan markets. Did you discuss it with your counterparts?

No. Right now, we’re working on specific projects that will build up to, and give everyone the confidence to finally ink an FTA.

China is your largest investor. Chinese foreign minister Wang Yi says China is Sri Lanka’s strategic partner. Your brother, too, notes the strategic nature of your port of Hambantota, which was built by the Chinese and on which they have a 99-year-lease and massive equity. Please define this ‘strategic’ relationship?

China helped us for the sake of development, that is all. Our war had shattered our country, we needed help to develop; they were ready, so why not? We took their money and developed that area. Hambantota is a valuable strategic asset because of its location, right in the middle of the Indian Ocean. It is sensitive geographical space. Unfortunately, the previous government literally gave it to China by swapping debt for equity and signing that lease. We would not have done the same and are trying to find a way out along with the Chinese now.

But the Chinese foreign minister also said that China will ‘not allow outside influences to interfere’ in Sri Lanka. That is open to interpretation. How will you assuage India’s apprehension on this front?

Since India is not interfering in our domestic matters that statement is not meant for India. India has never interfered. In fact, even India has made similar statements, that you will always protect us. And I am absolutely sure you will. Look, that is China’s view; ultimately, we Sri Lankans have to decide on what is interference and what is not.

The United States is pushing you to sign and renew a Millennium Compact Account (MCA) and a Status of Forces Agreement (SOFA). The reworked terms of the latter may enable the US to put boots on the ground in your country. Are you going to sign them?

We have appointed a commission to look into both those agreements.

Big power alliances are swarming all over the Indian Ocean. There’s the Quad on the one hand, and big powers such as China and Russia on the other. Will Sri Lanka join the Quad if asked?

That has not yet come up for discussion but we would have to talk it out among ourselves first and if we want to do it, we would have to first go to our cabinet. Whatever we do, Sri Lanka will assert its own interests first.

Sri Lanka is part of China’s Belt and Road Initiative. (BRI). But it is under fire from many countries around the world for its ‘debt-trap’ development. Do you share those concerns?

Sri Lanka has received a lot of benefits from being part of BRI. By the way, let me remind you – our external debt towards China is only 12% of our overall external debt, and we have not defaulted. We used whatever money we took from them to build infrastructure.

You are going to visit Buddhist religious sites but are also going to Tirupati. You are a devout Buddhist but you never miss an opportunity to go there. Why?

I’ve been going there whenever I feel like. Yes I am a Buddhist. But I have a deep belief in Lord Vishnu too.