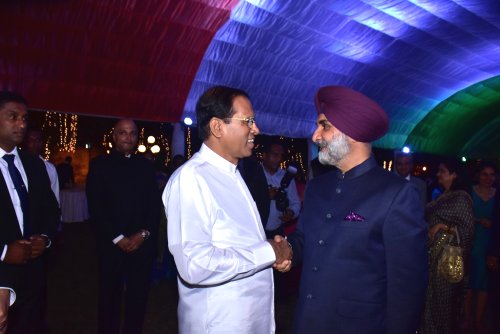 India will always appear on behalf of Sri Lanka fulfilling the role of a genuine friend, High Commissioner of India in Colombo Taranjit Singh Sandhu said.

The High Commissioner said that the bilateral relationship between the two countries has been strengthened as never before as a result of close cooperation between President Maithripala Sirisena and Indian Prime Minister Narendra Modi.

He made these remarks at a special ceremony conducted to commemorate the India’s Republic Day at the India House, the official residence of the Indian High Commissioner last evening (26). President Maithripala Sirisena was also a guest of the occasion.

Addressing the occasion, High Commissioner Sandhu said that Indian Prime Minister Narendra Modi has taken into consideration the fact that Sri Lanka is not just a neighboring country but an extremely close friendly ally of India. He added that the Prime Minister acts to portray this extremely close relationship.

“Sri Lanka was the first country to be a partner in the South Asian satellite that we launched last year, a promise made by Prime Minister Modi. Sri Lanka was the first SAARC country to join our National Knowledge Network launched just ten days ago., through which academic institutions will have digital access to more than 1600 top educational institutions in India and abroad. SriLankan airlines has now become the largest foreign carrier to fly to India. India today is the largest source of tourist arrivals into Sri Lanka. Sri Lankan students can now join the prestigious Indian Institute of Technology sitting here in Colombo. These are just a few examples of the breadth and depth of our relations.”

“We will remain with you offering all our support in rain and in sunshine. Our ships were the first at your shores with men and material when Sri Lanka was hit by floods last year. This is not just because of geographical proximity. As Prime Minister Modi said this is because we have been able to translate proximity to closeness.”

“There is a renewed vigor in both our countries to make people the center of the development story. India under the leadership of Prime Minister Modi and Sri Lanka under the national unity government headed by the HE President Maithripala Sirisena and Hon. Prime Minister Ranil Wickremesinghe have strong convictions regarding good governance. I am confident that India and Sri Lanka relations will continue to scale to new heights,” the Indian envoy said.