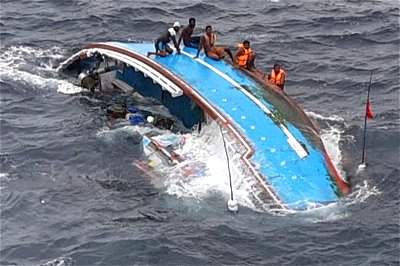 The Indian Coast Guard (ICG)) in Chennai coordinating with a merchant vessel has rescued six Sri Lankan fishermen who were in danger after their boat capsized in rough seas.

The details of the rescue operation prove to be quite riveting. The merchant vessel was on her way to Visakhapatnam when she sighted a capsized fishing boat with six survivors atop it, at about 7:15 AM on Sunday. On checking the location, the boat was found to be approximately 170 nautical miles east of Chennai.

At this point, the master transmitted the information to the MRCC, Mumbai, which was shared in time with MRCC personnel in Chennai for further coordination.

MRCC, Chennai coordinated with the vessel for the safe rescue of the survivors.

The six survivors have been identified as natives of Trincomalee in Sri Lanka. They were reportedly stranded and adrift at sea, braving the vagaries of rough weather for four days.

The MRCC further coordinated with the Sri Lankan Deputy High Commission in Chennai and MRCC, Colombo, to verify the credentials and arrange for their safe return of the rescued fishermen back to their homes.

The successful rescue operation reiterates the Indian Coast Guard’s resolve towards providing search-and-rescue cover in the vast indomitable sea areas and also highlights the synergy and coordination between the Merchant Marine and the Indian Coast Guard, towards the safety of lives at sea.