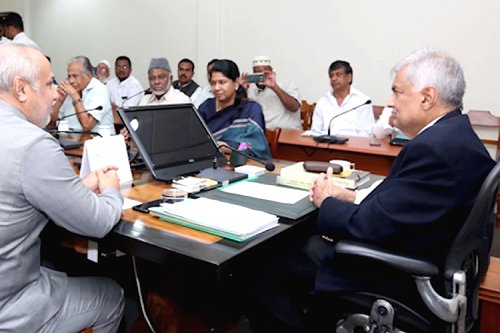 An Indian delegation including by DMK parliamentarian Kanimozhi Karunanidhi and several others of the Central government and states of Tamil Nadu and Kerala held discussions with the Sri Lankan Prime Minister Ranil Wickremesinghe Friday (13) at the Temple Trees.

Recalling the longstanding friendship between India and Sri Lanka, the Indian delegation pointed out that relations between the two countries should be further strengthened.

The Prime Minister briefed the delegation on the direct air service to be launched between Palaly Regional Airport in Jaffna and four Indian cities and the measures taken by the Government of Sri Lanka to start the service.

Minister Wedaarachchi addressing the meeting on the issue of Indian fisheries said that the Fisheries Societies representatives of the two countries should take part in the discussions to find a permanent solution and it would be very easy for both countries to reach a practical solution.