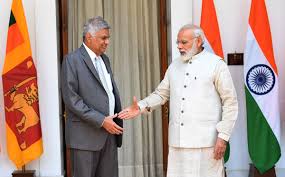 Reporters were not allowed to cover these meetings, with opportunities provided only for the taking of photographs and to be present when pleasantries were exchanged between Wickremesinghe and Indian officials, including Modi, before the beginning of talks, during the former’s various engagements in Delhi.

The Hambantota Port project, in particular, which Colombo is planning to lease to Beijing in exchange for debt, figured high in these talks, the sources said.

However, the Colombo Port City project, now dubbed Colombo International Financial City, being currently developed by the Chinese in a US$ 1.4 billion project, didn’t figure by name in these talks, they said.

Wickremesinghe had assured Modi and other Indian officials that the Hambantota Port will be used only for commercial purposes, and, from a military perspective, only Sri Lanka will have the prerogative to use it for defence purposes, and, no other country.

However, it isn’t clear whether there is a written agreement with the Chinese that they won’t use Hambantota for military purposes.

Earlier, Wickremesinghe met Congress leader Sonia Gandhi and former Indian Premier Manmohan Singh, where the Indian fisher poaching and the Chinese issues were discussed. With regard to the latter, Wickremesinghe assured that the Chinese interests would be restricted only to commercial issues and not military, they said.