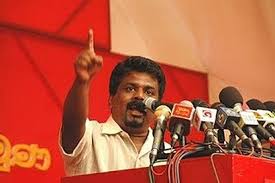 The Janatha Vimukthi Peramuna (JVP) said today they would discuss the Draft Bill of the 20th Amendment with all factions including the President, Prime Minister, former President Mahinda Rajapaksa and present it in Parliament in May as a Private Members Bill.

JVP leader Anura Kumara Dissanayake told a news conference that two-third majority was needed to pass the 20A and added that JVP alone could not get it enacted.

He said they had finished drafting the Bill mostly and added that they hoped to seek proposals and ideas of other parties to finish the rest of it.

“We will initiate a dialogue with civil society groups, intellectuals and people about the Draft Bill,” he said.

Mr. Dissanyake said some people accused them of being hasty to bring in the 20A and added that it was not haste but too late to do so.

“President Maithripala Sirisena should have abolished the Executive Presidency during the 100-day programme as promised,” he said.

Rejecting allegations that JVP was trying to lead the country to anarchy, he said 20A could be used to stabilize the country.

“19th Amendment was an interim proposal. A new Constitution should have been passed soon after the 19th A. There has been an instability as it was not done,”: he said.

Mr. Dissanyake said they were ready to discuss if someone argued that there should be a change in the electoral system with the change of the Presidency.