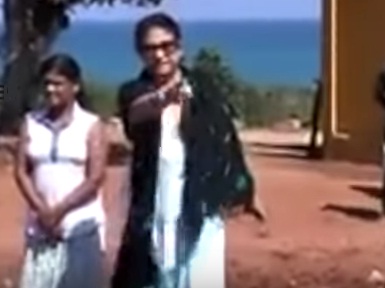 Ganesan made the comment after Deepti Bogollagama was shown on a video verbally abusing some Tamil devotees in Trincomalee last week.

Ganesan said that the manner in which Deepti Bogollagama behaved was harmful to national coexistence.

It was reported that Deepthi Bogollagama had desecrated the temple of village deities Kaa’li, Murukan and Vairavar worshipped by Tamils at the hill-top of Maththa’la-malai in Kooniththeevu, a traditional Tamil village located near Champoor in the Moothoor division of Trincomalee.

According to reports, while even police constables, accompanying the couple on an official visit, had removed their footwear before walking into the temple premises, the wife of the Governor behaved in a desecrating manner.

After being reminded by the Tamil female devotees, she started to verbally attack the devotees and was seen taking photos of them with her mobile phone.