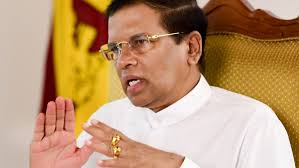 TNA parliamentarian M.A. Sumanthiran stated that he was told by the President Maithripala Srisena that President has no issues on granting amnesty to the political prisoners.

He stated this while responding to the question raised by the journalists asking what sort of activities that the TNA had taken with regard to Ananthasuthakaran.

When he was talking with regard to the political prisoners’ issue on last 26th, President commented like this, Sumanthirana added.

Constitutional expert says NCM is against the entire government, not only against the PM
Special Scheme to protest the people from the impacts of micro finance -Don’t pay the loan for six months- -Reporter for Global Tamil News-
Comment