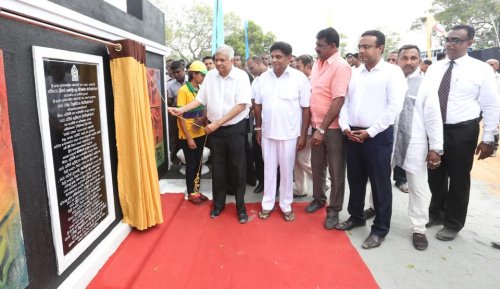 Prime Minister Ranil Wickremesinghe says that after the 30th of April, central government funds will not be available for the provincial councils and local government institutions.

He said the reason is the defeat of the expenditure head of the Ministry Internal and Home Affairs and Provincial Councils and Local Government in parliament on Thursday (March 28).

He blamed the opposition for defeating the expenditure heads and slashing the funds allocated for local government and provincial councils.

Wickremesinghe made these remarks while participating in the foundation stone laying ceremony for the Hambantota District Sports Complex on Saturday.

The construction work of the new sports complex was launched in parallel to the Yowun Puraya 2019 program in Weerawila Hambantota yesterday under the patronage of the Prime Minister.

The new sports complex that will be built at a cost of Rs. 3.5 billion will consist of a 400-meter track, an international standard swimming pool, an indoor stadium and accommodation facilities.

Expressing his views, Prime Minister Wickremesinghe said the government’s policy is to go to the villages and develop the village. The government has given the money to provincial councils and local governments.

“We do not control any of these. We gave money. Last Thursday the opposition party cut off the money that was allocated for both, the provincial councils and local governments. We did not stop these, the Opposition did.”

A private company based in Southern Sri Lanka is going to be provided the 100 acres of land in Killinochchi -Actions are being taken in secret- -Reporter for Global Tamil News-
Mannar Basin – Oil and gas exploration to begin next year: Hashim
Comment