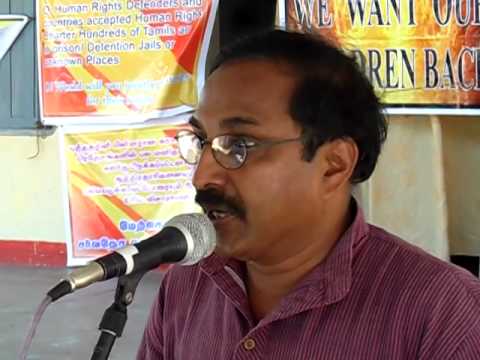 Kandiah Sarveswaran, Education Minister of Northern Provincial Council in Sri Lanka, who triggered a controversy over his refusal to unfurl the national flag of the island-nation, has justified his act. At the same time, he asserted that he did not “disrespect” the flag.

Asked by The Hindu about the adverse reactions his action triggered,  Sarveswaran, who was in India to attend a seminar, recalled that on his visit to a school in Vavuniya district of the Province, when he was requested to hoist the national flag, he asked the school authorities whether the latter had a flag of the Northern Province [each Province in Sri Lanka has its own flag] to unfurl and the response was in the negative. “So immediately, I instructed my officer of the Education Department to unfurl the national flag. Everything went off smoothly,” he said.

Contending that the row had been made out of the incident to “divert the public attention” on the discussions on constitutional reforms, the Minister, who is from the Eelam People’s Revolutionary Liberation Front, argued the national flag was not accepted across sections of people and the issue of designing a national flag acceptable to all “also forms part of any debate to resolve the ethnic conflict”.

However, taking note of Mr. Sarveswaran’s presence on Thursday, Ramiah Yogarajan, Sri Lanka’s Ambassador to Egypt and former Member of Parliament representing the ruling United National Party (UNP), pointed to the badge on the national flag that he wore and said, “I am proud” of displaying the national flag.