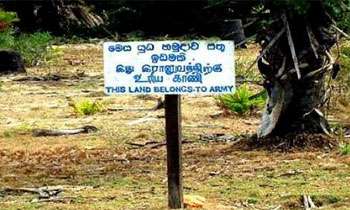 The Sri Lanka Army has released over five acres of private and state land held by the security forces in Ampara and Trincomalee in the Eastern Province.

Documents pertaining to 3 acres of private land in Thiriyaya under Kuchchaveli Divisional Secretariat (DS), 0.5 acre in Periyanilaweliin, Ampara under Kalmunai DS and a 2 acre plot of state land in Thirukkovil area were formally handed over to the Governor of Eastern Province, M L A M. Hizbullah and the Assistant District Secretary for onward arrangements during a brief ceremony held at the Governor’s Office in Trincomalee on Monday (25), the Army said.

“Major General Aruna Jayasekera, Commander Security Forces- East in keeping with the government’s policy of releasing Army-held lands of civilians in Ampara and Trincomalee districts delivered those related documents, giving a moral boost to the ongoing projects of reconciliation and ethnic harmony under the 4th phase of the project,” the Army Media Unit said.