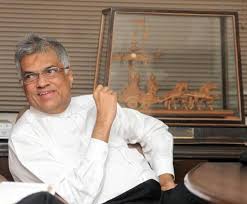 Prime Minister Ranil Wickremesinghe had asked the Kilinochchi District Secretariat to stop work on the restoration of LTTE cemetery in Kilinochchi, sources close to the PM said today.

They said that the Ministry of Development Policies and Economic Affairs had instructed the Kilinochchi Pradeshiya Sabha to stop work.

According to sources, Premier Wickremesinghe had informed Deputy Minister of Development Policies and Economic Affairs Niroshan Perera to get the Kilinochchi Pradeshiya Sabha to stop work.

Kilinochchi MP S. Sritharan had earlier allocated funds to renovate LTTE cemeteries in the north in commemoration of the LTTE Heroes Day which falls on Monday (November 27).

TNA says arrangements not made for Tamil diaspora to return
“Those who want to take legal action against me must consider why I took this stand” – Northern Province Education Minister Sarweswaran who refused to hoist the National Flag explains his position.
Comment