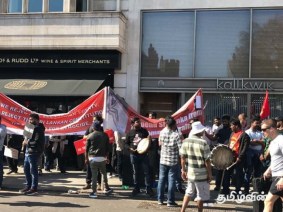 LTTE supporters staged a protest in London today against the ongoing visit to the UK by President Maithripala Sirisena.

The Transnational Government of Tamil Eelam (TGTE) said that it initiated a campaign titled “#GoBackMY3” to protest against the President’s visit to London to attend the Commonwealth Heads of Government’s meeting.

Failing this, the TGTE said that Sri Lanka should be referred to the International Criminal Court (ICC) and a UN Conducted Referendum should be conducted for the Tamils to decide their future and to ensure a peaceful, permanent political solution.