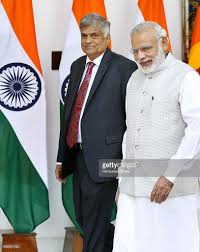 Prime Minister Ranil Wickremsinghe will visit India next week to set the agenda for Prime Minister Narendra Modi’s trip to Colombo in May, The Hindu newspaper reported.

“The visit of the PM of Sri Lanka to India from April 25 is part of our continuing engagement with the Government of Sri Lanka at the highest level,” an MEA spokesperson said, announcing the visit.

Officials said an MoU to develop Trincomalee port’s prospects through operating a major oil-storage facility, LNG plant and piped-gas projects and developing it as a key transit point with major expressways and industrial zones in the region is in the final stages of negotiations.

The two sides will also hold discussions on the Economic and Technology Cooperation Agreement (ETCA), a version of the free trade agreement, and will be taken forward during Mr. Modi’s visit for International Vesak Day, the annual Buddhist festival on May 12, officials told The Hindu.

Wickremsinghe, who frequently travels to India, is understood to be visiting India for a private visit from April 25 to 29, to attend a wedding, but will spend April 26 in Delhi for official meetings.

Modi will host a lunch for him.

Wickremesinghe’s visit is also significant as it comes a few weeks before his trip to Beijing to attend the Belt and Road Summit that Sri Lanka has joined.

While Chinese companies have already clinched many important infrastructure projects in Sri Lanka, including the Hambantota and Colombo port development projects, India is hopeful of more projects in the North and the East of the island.

Apart from the economic agenda, Wickremsinghe is expected to discuss the ongoing dispute over fishing rights in the Palk Strait with Ms. Swaraj.

Despite several rounds of negotiations between the fishing communities of the two countries, Indian fishermen continue to be apprehended by the Sri Lankan Navy for trespassing in their waters.