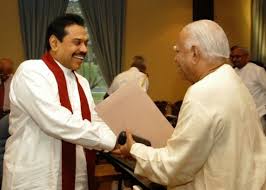 Sampanthan said that he had put forward the request when he met Rajapaksa at a Chinese event recently.

Former President Mahinda Rajapaksa, former Defence Secretary Gotabaya Rajapaksa, Sampanthan and others were present at an event held in Colombo recently to mark the 91st Anniversary of the founding of the Chinese People’s Liberation Army.

Mahinda Rajapaksa and Sampanthan were seen having a discussion while being seated next to each other.

Sampanthan told journalists in Trincomalee that they discussed the need to provide a political solution for the issues faced by the Tamils in the North and East.

According to Sampanthan, the former President had said that he had plans to address the issues faced by the Tamils in the North but could not implement some of those plans.

Sampanthan said that he told Rajapaksa to forget the past and support the process to draft a new Constitution to address the issues faced by the Tamils.