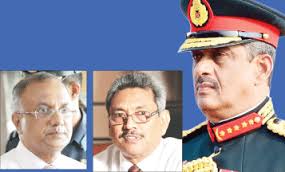 General Sarath Fonseka made waves again last week with the CID informing the Mt Lavinia Magistrate that he has given a statement implicating former Defence Secretary Gotabhaya Rajapaksa and former Chief of National Intelligence Kapila Hendavitarana in the attacks on journalists including the killing of Lasantha Wickrematunga and the assault on Keith Noyhr. According to the B Report No: B92/09 filed before the Mt Lavinia Magistrate, Gardihewa Sarath Chandralal Fonseka has given the CID a statement to the effect that at the time Lasantha Wickrematunga was murdered, he had not overseen security matters in the Colombo area and that this was handled by former Defence Secretary Gotabhaya Rajapaksa with Maj Gen Kapila Hendevitarana and that he had received information that the assault on journalists were carried out by a certain group that functioned under Chief of National Intelligence Hendevitarana. Fonseka had also said that when he was Army Commander, he was unaware that there was an Army intelligence detachment functioning from the Tripoli market premises in Maradana.

By the time Lasantha was murdered, Kapila Hendavitarana had retired from the army and was holding a civilian appointment in the Ministry of Defence. When Sarath Fonseka became Army Commander at the end of 2005, Hendavitarana was in the Sri Lankan Embassy Bankok as Minister Counselor. Even before he was posted to Bangkok by then President Chandrika Kumaratunga, he had ceased to be the Director Military Intelligence and was functioning as the Director General Military Intelligence which was a position not in the Army but in the Joint Operations Headquarters. The Director Military Intelligence is a Brigadier level appointment in the Army and Hendavitarana had to be shifted out in order to be promoted Major General. After the Rajapaksa government came into power, Hendavitarana came back to Sri Lanka around February 2006 and he retired from the Army in 2006 October.

After coming back from Bangkok, Hendavitarana was appointed as an advisor on Military Intelligence to the Minister of Defence. After he retired from the Army in October 2006, a position was created for him as Chief of National Intelligence. His task was basically coordinating the work of the intelligence arms of the Army, Navy, Air Force and police intelligence units like the CID, TID, Special Branch etc. This was one of the major innovations introduced by Gotabhaya Rajapaksa – getting all the intelligence bodies of the armed forces and police to share information and work together to eliminate terrorism. However, neither Gotabhaya Rajapaksa nor Hendavitarana who were both retired from the Army could command troops or order troop movements. This had to be done by someone in uniform.

Every soldier works under a chain of command and no soldier can do anything unless told to do so by his immediate superior. That’s how the system works. Even though Sarath Fonseka now says that Gota met the intelligence chiefs separately and that he was against the service commanders even attending that weekly meeting, as the commander of the army, Fonseka always had the authority to summon the Director of Military Intelligence who was a Brigadier under him and ask him what was going on. Yet by saying that Gota had a separate operation going with the intelligence heads that he as Army commander was not privy to, Fonseka is implying that he dared not summon the Brigadier who was head of the DMI to ask him what was going on!

Furthermore, to tell the CID that he did not know that there was an Army intelligence detachment functioning in the Tripoli (market in Maradana) is to in effect say that he was not aware of what the army he was commanding was doing. This was not the first time that Fonseka had made statements of this nature. Even with regard to the famous white flag case, he had told Frederica Jansz that he had heard from certain journalists that Gota had ordered Shavendra Silva to kill any LTTE leaders trying to surrender and that LTTE front rankers B. Nadesan, S.Pulidevan and Ramesh were killed while they were trying to surrender. If Gota had indeed given such instructions to Shavendra Silva, Fonseka should not be hearing about it from journalists but from someone within the Army. When he made this statement, Fonseka was the common candidate contesting against Mahinda Rajapaksa at the 2010 Presidential elections. After Frederica wrote an article in the Sunday Leader titled “Gota ordered them to be shot – General Sarath Fonseka”, all hell broke lose with the UNP and JVP trying to force Fonseka to retract or disown the statement.

A mighty fiasco ensued with Fonseka repeating the same allegation he made to the Sunday Leader at a propaganda rally in Ratnapura which was caught on camera and broadcast over the TV channels but after the story appeared in the Sunday Leader, he held a press conference the next day trying to explain away what he had said. When the Rajapaksa government filed action in the High Courts against him over this statement, he tried to make out that he had never made any such statement to Frederica and that she does not have a recording to prove that he had said it and that she had not even taken down notes during the discussion and that what she was presenting to courts as her notes may have been written later.

Asked why he had not denied the story after it appeared in the Sunday Leader, he had said that Frederica had pleaded with him not to do so because she would be jailed. The High Court refused to accept that he would make such a sacrifice on behalf of a journalist whom he accused to lying. He was asked whether any incident where LTTE leaders trying to surrender with white flags were killed by the troops had actually taken place, to which he answered in the negative. However, video footage of the Ratnapura meeting proved that he had in fact said everything he is supposed to have told Frederica. Fonseka was sentenced to three years in jail under the emergency regulations for making false statements that could cause public disquiet!

General Fonseka has a history of putting his foot in his mouth – big time – and he has done it again with the statement about Gota and Hendavitarana operating a hit squad against journalists without his knowledge. One party that will be happy with this bit of news will be denizens of the UN Office of the High Commissioner on Human Rights which has been calling for the Sri Lankan military to be brought under civilian control. Going by the stories that Fonseka has been telling the press and the CID since he left the army in 2009, unbeknownst to all, the Sri Lanka Army appears to have always under civilian control with retired army officers in plain clothes commanding the troops both on the battlefields of the Vanni and the urban jungle in Colombo!