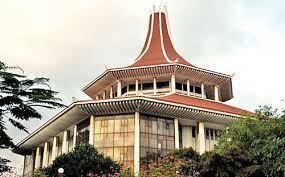 The Court directed to issue notice through the registrar and for the registrar to send copies to the Attorney General (AG). The AG was requested to assist court as amicus curiae.

The bench comprised of Justices Priyantha Jayawardana, Vijith K. Malalgoda and Gamini Amarasekara. One writ petition was filed by six members of ‘Sathya Gaveshakayo’ and supported by Kanishka Vitharana.

Petitioners cited the Elections Commission, its Chairman Mahinda Deshapriya and members Nalin Abeysekara and Ratnajeevan Hoole as respondents. The petitioners sought a court order in the nature of writ of mandamus directing the EC to hold elections to the Sabaragamuwa, North Central, Eastern, Central, Wayamba and Northern Provincial Councils.

They also sought a writ of mandamus directing the respondents to take action required by article 104 B of the Constitution, read with Provincial Council Act No.2 of 1988 as it stood prior to the enactment of Act No.17 of 2017 for the election of members to the Sabaragamuwa, North Central, Eastern, Central, Wayamba and Northern Provincial Councils. They said terms of office of the six provincial councils ended and were already dissolved. Sanjeewa Jayawardena PC appeared for several other petitioners. Uditha Egalahewa PC with N.K. Ashokbharan appeared for the Elections Commissioner.