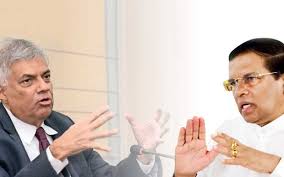 Addressing the media soon after handing over the no faith motions, UNP MPs Mujibur Rahuman, Sydney Jayaratne and Ashu Marasinghe said that those 16 SLFPers, including six ministers, who had voted for the no confidence motion against Prime Minister Ranil Wickremesinghe and the government should be expelled from the cabinet and government. The UNP accused them of violating collective responsibility.

Earlier in the day, Colombo District UNP MP Rahuman told The Island that the they had decided to put off the handing over of the no-confidence motions scheduled for yesterday till next Monday.

The UNP handed over the no-faith motions though President Maithripala Sirisena had asked the UNP ministers not to go ahead with it.

Sources said that President had warned that if the UNP went ahead with its plan, he would have to allow the SLFP and the Joint Opposition operation to secure required support to form a new government with former President Rajapaksa as the Prime Minister.

Their response had irked the President, sources said, adding that he had reminded the UNP group that ministers Samaraweera, Akila Viraj Kariyawasam and Harin Fernando had publicly criticised him.

“How could they sit in the cabinet meeting chaired by me then?” the President queried.

“If you go ahead with your plan then the SLFP and JO will unite. They’ll form a government under former President Rajapaksa. I would have to permit them.”

PM Wickremesinghe has directed UNP MPs to withdraw no-faith motions handed over to Speaker Karu Jayasuriya, Derana reported last night. However, a spokesman for the group denied receiving Wickremesinghe’s directive at the time this edition went to press.