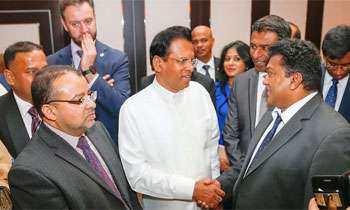 When the Sri Lankan Government took action to impose the curfew, banning the social media and declaring the State of Emergency to control the Sinhala-Muslim unrest in the Kandy District in March, there were undue pressures from certain diplomats on the Government, President Maithripala Sirisena said on Tuesday in London.

“Certain diplomats spoke against the Government moves to take necessary action-including banning access to social media sites. Some of the diplomats acted beyond their mandate against the move,” the President told a group of Sri Lanka community in London Tuesday night.

“But despite those oppositions, the Government had taken necessary action, and because of that we able to prevent a major tragedy,” he said.

The President also said that at that time, an organization connected to the UN had stated that Sri Lanka had managed to impose a complete ban on the social media sites-something even the US couldn’t do.

“Almost all the international organizations welcomed the Government move to ban social media, and many parents of school children and others told me that it was a good move and requested not to remove the ban,” he said.

The President said that about 75% of the media reports on the Kandy unrest incidents were completely wrong.

“Those wrong information reached to the Sri Lankan diaspora, who eventually come to a wrong conclusion about the country’s situation,” the President said.

He requested the members of the Sri Lankan community, who were present at the meeting, not to depend only on social media for credible information.

A large number of the Sri Lankan community living in London participated.