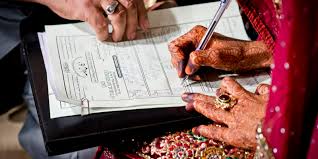 Sri Lanka’s Cabinet of Ministers at the weekly meeting held Tuesday has approved a proposal to amend the Muslim Marriage and Divorce Act.

The Muslim Marriage and Divorce Act (MMDA) of 1951 and its amendments make provisions for the registration of marriages and divorces of the Muslim community in Sri Lanka.

The Muslim community and human rights activists have been of the opinion that certain provisions of the act should be amended.

The proposal contains amendments to the Act including the legal age for a Muslim marriage and the process that should be followed when registering a marriage.

Muslim parliamentarians of Sri Lanka have decided to amend several core articles in the Muslim Marriage and Divorce Act (including articles governing minimum age limit for marriage & woman’s consent and handed over a proposal to the Minister of Justice Thalatha Athukorala last month regarding the amendments required to be made to the Act.

The Muslim MPs have decided that the age of marriage for both the bride and the groom should be 18 years. Furthermore, the bride should sign the Register of Marriage as a sign of her consent.

The MPs have also decided to upgrade the required qualification for a ‘Kadi’, an Islamic judge to Attorney-at-Law and allow female Kadis, women who will adjudicate family law of Muslims.

The proposal jointly presented by Minister of Postal Services & Muslim Religious Affairs Abdul Haleem and Minister of Justice Thalatha Atukorala to advise the Legal Draftsman to draft amendments to the Act, including age of marriage, registration procedure and consent for marriage received the cabinet’s approval.