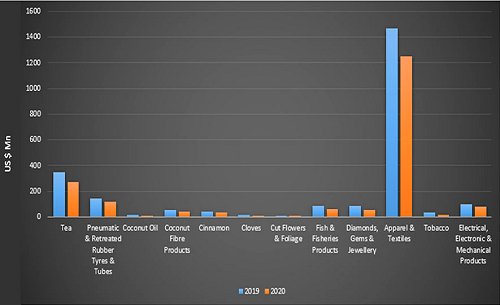 Sri Lanka’s merchandize export earnings fell by 41.9 percent in March 2020 as the spread of COVID-19 in the country disrupted the production of merchandise, the Export Development Board (EDB) said.

According to the monthly exports statistics, the year-on-year export earnings fell to US$ 646 million from US$ 1.112 billion recorded in March 2019.

Apparel sector being the largest contributor has shown a 41 percent decline during the month of March 2020 compared to the same month in the previous year.

Export Development Board (EDB) Chairman Prabhash Subasinghe noted that even though there is a decline in exports during the month of March 2020, such a decline is expected due to the global economic and trading environment.

“However the EDB is taking every effort to assist the exporters to resume operations and we firmly believe that exports will be back on track in the near future,” he added.

With the release of March 2020 data, the country’s foreign exchange earnings show an overall decline of 19 percent during January-March 2020 in comparison to the same period in 2019 reaching US$ 3.382 billion from US$ 4.176 billion respectively, recording a 32 percent achievement against the annual revised target of US$ 10.750 billion for the year 2020.

Estimates in the services exports of ICT/ BPM, Construction, Financial services, Logistics and Wellness Tourism sectors show an overall revenue of US$ 805 million during the period compared to US$ 1.060 billion last year.

When looking at the disaggregate level of products, even though some of the major sectors show a decline in earnings, certain other sectors show a positive growth during the period under consideration. The following graph shows some sectors with negative growth, the EDB said.