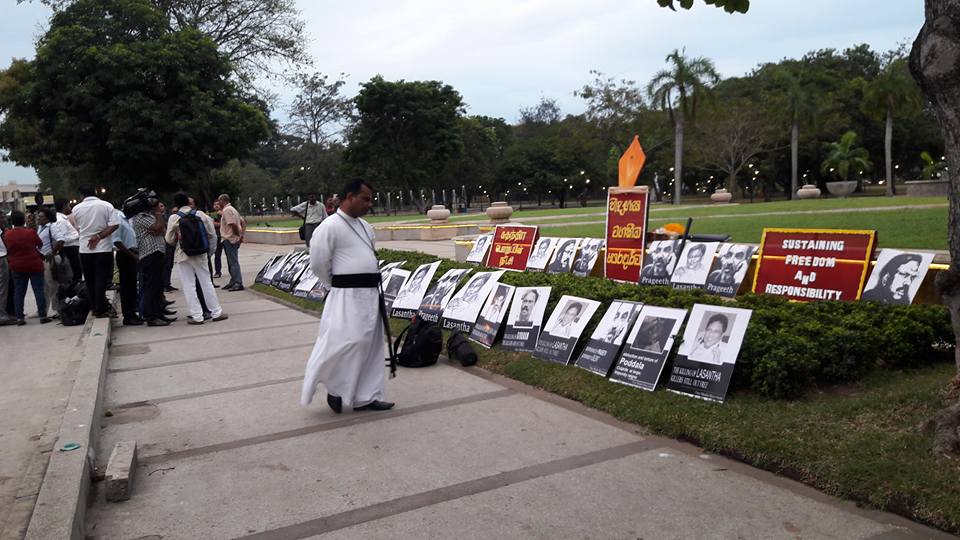 Dozens of Sri Lankan journalists and media rights activists lit candles and held placards on Tuesday to remember dozens of journalists who were killed, abducted or disappeared under a previous Government, the Associated Press reported.

Dodawatta, convener of the Free Media Movement which organized the vigil, said even after three years in power, the current government has failed to punish those responsible for the crimes and deliver justice to the journalists and their families.

President Maithripala Sirisena came to power in 2015, promising to end a culture of impunity and punish those responsible for the crimes against the journalists.

During former President Mahinda Rajapaksa’s tenure, dozens of journalists were killed, abducted and tortured and some fled the country fearing for their lives. Others were killed or disappeared during the civil war that ended in 2009 with the defeat of Tamil Tiger rebels.

In some cases, military soldiers have been arrested and later released on bail.

Dodawatta said so far no one has been punished for the attacks on the media, and therefore, “we urge the Government to expedite the investigations and punish those culprits.”

Organizers called the vigil “Black January,” a commemoration of the killings and abductions of journalists and the destruction of television studios, most of which occurred during the months of January between 2005 and 2010.

Among the participants was Sandya Ekneligoda, who has struggled for eight years to discover what happened to her abducted husband, Prageeth Ekneligoda.

Prageeth, a journalist and cartoonist, wrote about corruption, nepotism and Rajapaksa’s leadership of the military campaign against the rebels. He was abducted two days before a 2010 Presidential Election in which he actively supported Rajapaksa’s rival. Several soldiers have been arrested in connection with his disappearance.

“I am not happy with the way the authorities are doing the investigations, but I will continue my fight and I think the judiciary will deliver me justice someday,” she said.

During the country’s 26-year civil war, both the Government and the Tamil Tiger rebels were accused of killing and abducting critics.

The Government’s victory in 2009 ended the rebels’ campaign for an independent state for ethnic minority Tamils.