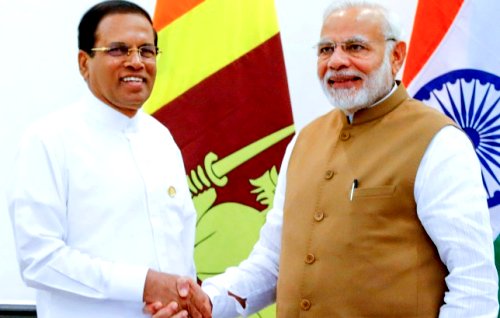 Sri Lanka’s political leaders today congratulated the Indian Prime Minister Narendra Modi on his victory in the recently concluded General Elections at which the governing Bharatiya Janata Party (BJP) is set to win about 300 of the 543 seats in Indian parliament.

Sri Lanka President Maithripala Sirisena extending his warm congratulations to the Indian Prime Minister Modi hoped that bilateral relations between the two countries will continue to grow and strengthen.

“The decision of the people of India to entrust your Party and its alliance partners the responsibility of guiding India’s destiny for a further term with this renewed mandate is a clear endorsement of the policies adopted under your stewardship,” Sirisena said in his congratulatory message to Modi.

“Having been associated with you, I would like to express the hope that in your second term at India’s helm that bilateral relations between Sri Lanka and India will continue to grow, and strengthen, particularly on the economic front.

The President also emphasized that India has a key role to play in spearheading regional growth that brings prosperity to the region.