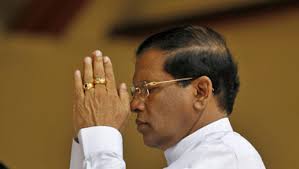 Sri Lanka’s President Maithripala Sirisena met with the families of disappeared persons in Jaffna on Monday and assured them that he will issue relevant directives to address the demands of the families.

The President, who was in Jaffna to attend the Development Committee meeting, held a discussion with the families of the missing persons at the Northern Province Governor’s Office in Jaffna.

President Sirisena meeting with the families of the disappeared promised that he would issue directives to the National Security Council to release lists of persons who surrendered to the Armed forces in final phase of the war, detainees, and political prisoners.

Families of the disappeared in the North were holding a continuous demonstration for more than hundred days seeking to find the whereabouts of their family members disappeared during and after the war ended in 2009.

During the meeting, a group of parents of missing persons representing all the eight districts of the North and Eastern Provinces handed over a letter to the President regarding their missing children.

The letter stated five key demands requesting the release of lists of all who surrendered to the armed forces, during and after the war, particularly during the last phase, a list of all secret detention centers, their status and list of detainees, and a list of all political prisoners held under the Prevention of Terrorism Act (PTA).

The families also demanded the government to release to the public all reports by commissions appointed over the years to address the issue of disappearances and the Government’s response to those reports.

Responding to the families’ demands, President Sirisena said he would take up the matter in Tuesday’s National Security Council meeting in Colombo.

Since the end of the war in 2009, several commissions have been set up to address the issue of missing persons but no actions have been taken based on the recommendations made by those commissions.

In August 2016, the government passed a Bill in Parliament to establish a permanent Office of Missing Persons (OMP), however, the President, is yet to operationalize the office.

At the meeting the President has said that the parliament would debate on the OMP on 22 June.

Jaffna University academic Guruparan Kumaravadivel, a spokesman for the Tamil Civil Society Forum said “We will keep track of those promises.”