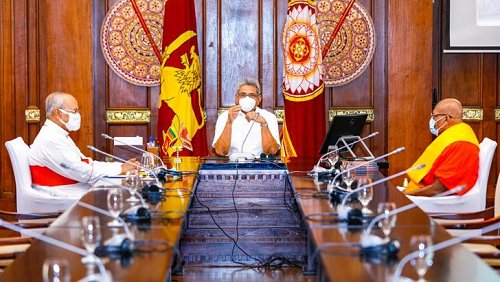 Inquiring about the current progress of the COVID–19 prevention activities, both Maha Nayaka Thero and the Cardinal expressed their satisfaction over the measures taken by the President to control the spread of the virus while providing relief to the affected people, President’s Media Division said.

Two religious leaders expressed hope that the pandemic will be brought under control soon. President was confident that the curfew could be gradually relaxed in coming weeks.

Maha Nayaka Thero said that he will requests the Buddhists to celebrate upcoming Vesak festival while remaining at homes. President pointed out the possibility of utilizing electronic media for this purpose.

While inquiring about the progress of investigations on Easter Sunday attacks Cardinal Malcolm Ranjith emphasized the need of identifying masterminds of these cowardly attacks. The objectives of a suicide attack go beyond just killing scores of people said the President adding that it is the endeavor of the Government to identify those who are behind the sinister motive.

Cardinal Ranjith observed that the time has come to deviate from election propaganda that is wasteful and spiteful and adopt a new political culture.

President said that he too has given thought of changing useless and expensive election campaigns.