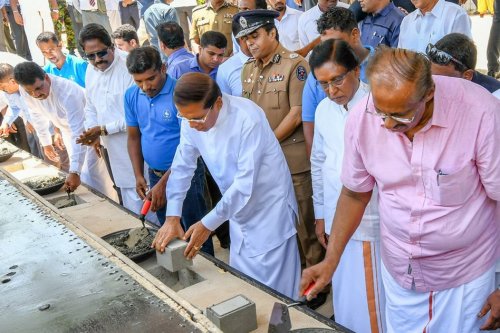 Sri Lanka President Maithripala Sirisena says 88 percent of the lands occupied by the Security Forces have been released to their original owners and the government is of the clear stance to expedite the release of the remaining 12 percent to the owners as well.

The President also said that the lands belonging to Myliddy School and other area schools, which are still under the custody of the security forces, will be released within the next two weeks.

The President made these remarks this morning joining in the recommencement of re-construction work of the Myliddy Fishery Harbor.

The President further said that an accelerated program will be devised for those who lost their lands near the fisheries harbor.

Expressing his views, the President said everyone’s goal and determination should be to ensure that there will be no war in the country and there should be no room at any cost for the terrorism to pull the country back costing thousands of lives and destroying national resources.

The President also pointed out that fulfilling post war responsibilities, the present government dedicated itself within the past three years to exonerate the country from allegations levelled against it by the international community, in order to ensure Genuine Freedom to the citizens of the country.

He further stated, it is one of the government’s prime concerns to rejuvenate the inert development and win the development rights of people in the north and east. A special Presidential Task Force has been established for this purpose and it regularly meets to reviews the progress, the President said.

Recalling that no other President has toured the North as much as he has done, the President said he has joined hands identifying the issues of the people in the North to diligently fulfill the responsibility of expediting the implementation of relevant services.

Speaking on the drug problem faced by the North and the whole country, President Sirisena said that death penalty would be enforced without any hesitation to those who are involved in drug trafficking while being imprisoned already for the crime.

The President unveiled the commemorative plaque and commenced the reconstruction of the Middeniya Fishery Harbor. Thereafter the President engaged in friendly conversations with fishermen in the area.