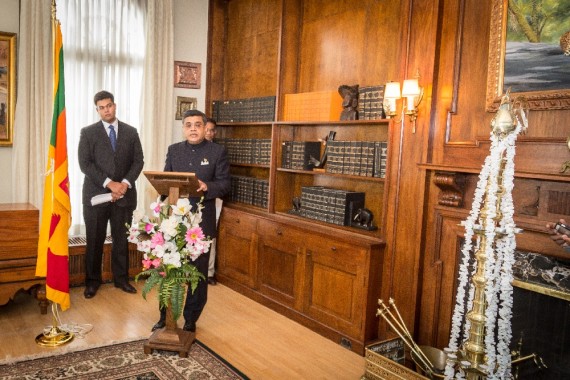 Sri Lanka says relations with Canada had grown exponentially in the past year in a number of sectors.

Ahmed A. Jawad, Sri Lanka’s High Commissioner to Canada observed that Sri Lanka – Canada bilateral relations had grown exponentially in the past year in a number of sectors, culminating with Sri Lanka’s participation at the UN Peacekeeping Defence Ministerial Meeting hosted by Canada in Vancouver in November 2017.

High Commissioner Jawad expressed confidence that such  multi-faceted ties would contribute immensely in furthering relations between the two countries and that the Canada – Sri Lanka Friendship Group in the Federal Parliament had a special role to play in the future as well.

Speaking after the election, Chair, Yasmin Ratansi had expressed great satisfaction at the progress made by the Friendship Group in promoting greater and stronger relations between Canada and Sri Lanka in the past year. In particular, she highlighted the tour undertaken by a 25-member business and investment delegation, comprising 22 Canadians of Sri Lankan extraction along with three federal parliamentarians, and the extensive meetings they had with a cross section of Sri Lankan society.  The understanding that was generated, she observed, would enable the Friendship Group to play an even more effective role in the future.  She expressed the hope that the group would contribute its best in this direction in 2018 as well.