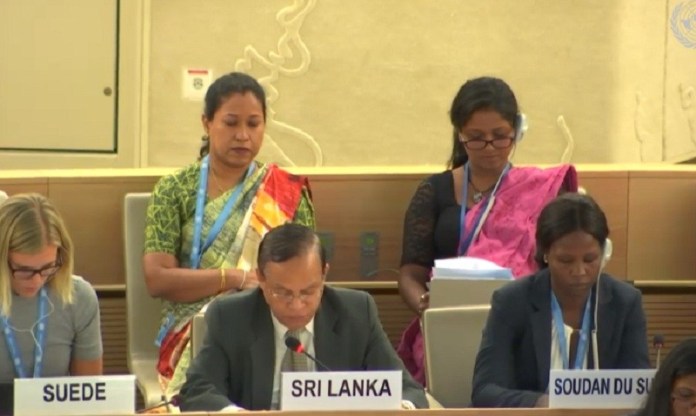 Ambassador A.L.A. Azeez, Sri Lanka’s Permanent Representative to the UN in Geneva told the UNHRC in Geneva during the 42nd session today that Silva’s appointment was an internal matter.

He also noted Sri Lanka’s disappointment at concerns being raised by some countries over Silva’s appointment based on allegations.

“With reference to the recent appointment of the Army Commander it must be noted that this is a sovereign decision taken by the Head of State. External attempts to influence decisions and internal administrative processes of public service promotions in Sri Lanka are unwarranted and unacceptable. Articulating a position of concern on this appointment by certain bilateral partners and international entities, based on allegations, is regrettable and contrary to the principles of natural justice,” he said.

Yesterday the Core Group on Sri Lanka raised concerns at the UN Human Rights Council (UNHRC) during its ongoing session on the appointment of Lieutenant General Shavendra Silva as the Army Commander.

In a statement made on behalf of Canada, Germany North Macedonia, Montenegro, and the United Kingdom as members of the Human Rights Council core group on Sri Lanka, the UK’s International Ambassador for Human Rights, Rita French outlined that the UK remains steadfast in its commitment to help Sri Lanka deliver peace, reconciliation and prosperity for all communities.

“We hope that Sri Lanka will put this in place as a matter of priority. Madame High Commissioner, we share the concern expressed in your statement of 19 August that the appointment of General Silva as Army Commander severely compromises Sri Lanka’s commitment to promote justice and accountability and undermines reconciliation efforts. The core group believes that it is vital for peace and prosperity that Sri Lanka builds confidence in its commitment to protecting political space and human rights,” the Core Group had said.