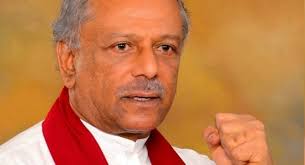 The Government yesterday formally withdrew its co-sponsorship from the UN Resolution on Sri Lanka and offered to address issues on accountability through a domestic process.

Gunawardena, speaking at the 43rd Session of the UN Human Rights Council (UNHRC) in Geneva yesterday, said that the Resolution on Sri Lanka co-sponsored by the former Government was a violation of the Constitution of Sri Lanka.

He said that the resolution was co-sponsored by the former Sri Lankan Government without the consent of then President Maithripala Sirisena or Parliament.

As a result, the Minister said that Sri Lanka will withdraw its co-sponsorship of Resolution 40/1 and previous Resolutions 30/1 and 34/1.

The Minister said that Sri Lanka will however continue to work with the UN and will also ensure justice and reconciliation and address the concerns of the vulnerable sections of society.

He said that Sri Lanka will appoint a Commission of Inquiry (CoI) headed by a Supreme Court justice to review reports of former commissions which investigated alleged abuse of human rights and humanitarian law.

Gunawardena said that the Commission of Inquiry will propose measures to be taken to implement some of the past recommendations keeping in mind the policy of the new Government.