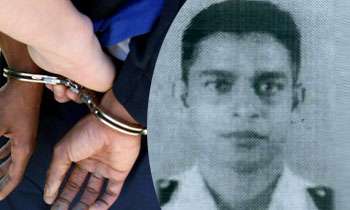 Close on the heels of retired Admiral Wasantha Karannagoda filing a fundamental rights application in the Supreme Court to prevent him being arrested in connection with the alleged wartime disappearance of 11 youth, the police have arrested ex-Lt. Commander Sampath Munasinghe alias ‘Navy Sampath,’ in connection with the inquiry.

Karannagoda’s case is to be supported on March 01.

Karannagoda’s moved Supreme Court following Secretary to the Ministry of Defence Hemasiri Fernando’s January 21 declaration that 11 Navy personnel would be prosecuted within two weeks over the disappearances.

Fernando was referring to the disappearances which allegedly took place in 2008 and 2009.

The police arrested Lt. Commander Munasinghe on June 10, 2009 following the then Navy Commander Admiral Karannagoda lodging a complaint with the police following the recovery of some national identity cards, cash, etc. in the officer’s cabin. The recovery was made by the police in the presence of Naval Provost.

At the time of his arrest, Munasinghe functioned as the head of Karannagoda’s security contingent.

Among those officers granted bail after being arrested in connection with the disappearances is Commodore D. K. P. Dassanayake, wartime Navy spokesman.

Following the arrest of Lt. Commander Munasinghe in June 2009, the Navy inquired into the incident. However, the investigations have been halted once it transpired that there were killings.

The Geneva-based United Nations Human Rights Council (UNHRC), too, is inquiring into the Navy involvement in the abductions.