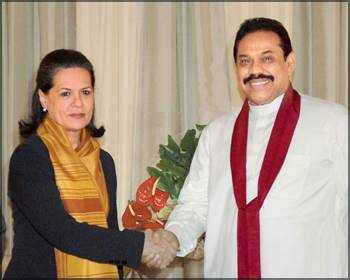 India had helped Sri Lanka fight the war against the Liberation Tigers of Tamil Eelam (LTTE) even without being asked to, says former Sri Lankan president Mahinda Rajapaksa in an exclusive interview to www.wionews.com posted on Monday.

“They (India) helped us! We didn’t have to ask! Because I was fighting your war, India’s war, not my war, actually,” Rajapaksa told the Indian interviewer, Padma Rao Sundarji.

“The LTTE killed your prime minister, Rajiv Gandhi and so many other people in India and on your soil, not ours. So in that way, it was not only my war, it was an Indian war, it was a humanitarian war. India helped us in every possible way,” he asserted.

“We didn’t want to publicize it, tell the press too much.  And not only China and Pakistan, even the British and the Americans helped us,” he added.

Asked to comment further on his earlier claim that the Indian external intelligence agency RAW had engineered his ouster in the January 2015 Presidential election, Rajapaksa said: “You know, I don’t want to go into the past. What’s done is done. It’s a new page now.”

In the light of the allegation that it was under Indian Prime Minister Narendra Modi’s watch that RAW, led by National Security Advisor Ajit Doval, had  engineered his electoral defeat, Rajapaksa was asked what he thought of Modi.

“I regard myself a friend of your PM Modi. I admire what he has done for your country, India. And his international prestige. I really like the way he has harnessed the support of the Indian Diaspora in a way I couldn’t! I admire his patriotism and his drive at modernizing India. Yes we admire him, there’s no question.”

On India’s view that full implementation of the 13th constitutional amendment is the best way to solve the Tamil-Sinhalese conflict in the country, Rajapaksa said: “I won’t say it’s the best solution. If it were, the problem would have surely been solved by now. We must remember that all communities must get together to give a solution. You can’t come up with one solution only to satisfy one section or community. We have to satisfy all.”

No danger from China

Asked to comment on the fear that China might colonize Sri Lanka given the financial control it has acquired under his government as well as the present one, Rajapaksa said: “China is a valued friend and a partner in development, that’s all. There can be no talk of colonization as such.”

But he added that there is a “significant difference” between the approach of his government and that of the incumbent regime to Chinese projects like the Hambantota port.

“The Chinese projects were negotiated by our government as per the structures I described. For Hambantota, it was a Supply-Operate-Transfer (SOT) arrangement only for the terminal and the land was leased to them. The port was under our control. But the present government has changed all those policies,” Rajapaksa said.

Asked if it would not be better for Sri Lanka to befriend India rather than Pakistan which ‘breeds’ Islamist terrorists, Rajapaksa said: “We believe in improving relations with all countries in our neighborhood. This I must tell you. Both India and Pakistan have helped us as best as they can, we have traditionally been friends of both. And that friendship has not been mutually exclusive and contradictory, that is, friendship with one has not been at the expense of the other.”

“We are mindful of the sentiments of our citizens of Islamic faith,” he added to the Muslims who are 8% of Sri Lanka’s population.

Rajapaksa still thinks that there is a lurking danger of an LTTE revival.

Commenting on the arrest of some former cadres of the militant organisation, he said: “They’re probably the tip of the iceberg. The problem is much larger.”