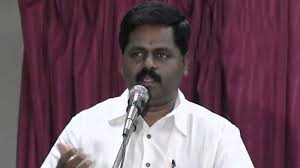 Speaking in Parliament today the TNA MP claimed that Tamils felt threatened by the Sri Lanka flag as the Lion on the flag is seen showing the sword to the colours representing the minorities.

He said that while some concerns had been raised over the refusal to sing the national anthem at events in the North recently, the MP said that the concerns are justifiable as the concerns of the Tamils are not addressed.

The MP said that even some concerns he raised in Parliament today were not translated correctly into Sinhalese.

Shritharan said that some TNA MPs were supporting the budget of the Government purely on a request by the TNA leadership.

Reacting to his statements on the national flag, Minister P. Harrison said that the MP must respect the Sri Lanka flag.

He also urged the MP not to attempt to create discord among the communities in the country, especially at a time when the Government is promoting reconciliation.